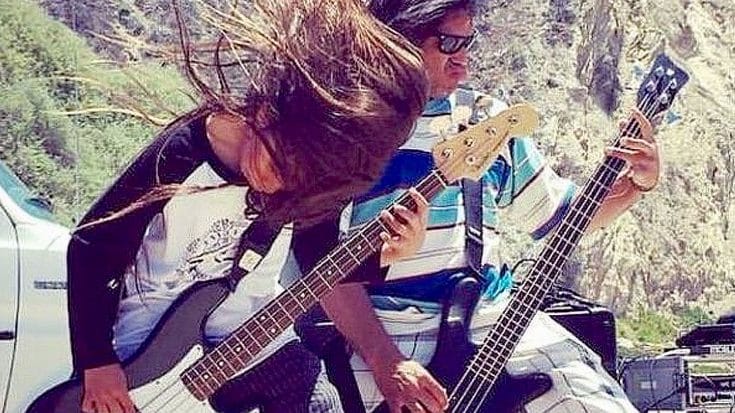 Roles were reversed this weekend as 12-year-old Tye Trujillo shook things up a bit and brought his old man, Metallica bassist Robert Trujillo, onstage with him for the last of his shows with California nü-metal rockers Korn before they rejoin bassist Reginald “Fieldy” Arvizu back here in the states for the next leg of their tour.

In a video posted to drummer Ray Luzier’s official Facebook page, Robert and Tye can be seen flanking Korn singer Jonathan Davis and jamming on opposite ends of the stage, looking like mirror images of each other with long hair flying around and near identical playing styles. According to guitarist James “Munky” Shaffer, looks and his playing style aren’t the only things he shares with his dad:

“When we go to the shows, he’s got people wanting his picture and his autograph – he’s a little overwhelmed, but he’s handling himself just like his dad, which is cool, collected and modest.”

Tye’s tenure in Korn may be over, but there’s no denying that the middle schooler is on track to take the music world by storm and with a fierce work ethic that’s impressed everyone from fans and critics to his Korn bandmates and his own dad, the sky’s the limit in terms of where Tye Trujillo’s talent will take him – and he’s absolutely ready for whatever comes his way.