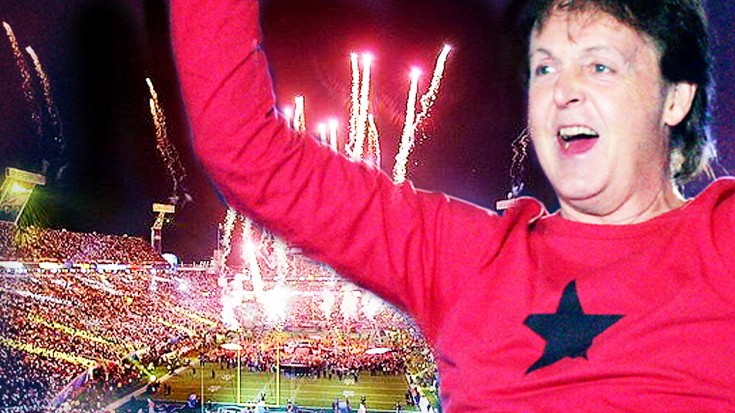 From the beginning of time itself, well, since its 1920’s inception, the Super Bowl has been one of the largest events in the entire world bringing music, sports, entertainment and advertising to a clever and beneficial standpoint. And, as part of the Super Bowl, the Halftime Show is an epic slot housing some of the greatest names in the music industry that the world anticipates annually.

After posting certain memes promoting AC/DC and other bands rocking the halftime show, we figured it was time to actually sit down and see why the classic rock genre owns the show every time they get the chance. As we look into the performances of some of the greatest names in rock and how they executed these incredible acts, we will prove the never-ending theory that: classic rock IS the Super Bowl Halftime Show.

Let’s start with Steven Tyler’s “Walk This Way” performance, shall we? Dialing it back to 2001, Aerosmith frontman Steven Tyler rocked the stage with pop favorites Britney Spears and NYSYNC, R &B queen Mary J. Blige and rapper Nelly and took Super Bowl XXXV by storm.

As Aerosmith was known to have some of the loudest, rowdiest and most dangerous concerts back in the day, it makes total sense that Steven would deliver whole heartedly on this massive stage with his signature high pitch screams. Belting out the timeless Aerosmith hit, shifting through the talented performers, Steven shares the stage to take “Walk This Way” to a completely different level no fans had seen before.

The only way to start out a Stones show is with a giant mouth and signature tongue hanging out and Super Bowl XL Halftime Show gave us just that when the aging rockstars delivered a flawless performance “Start Me Up” with Jagger’s iconic dance moves on point, as usual.

Merging into an incredible live rendition of hit “Rough Justice,” legendary guitarist Keith Richards brings the rhythm as Ronnie Wood slays some southern rock spunk out with seriously killer slide guitar work that will blow you away. And, finally, ending with the indistinguishable ballad “No Satisfaction,” The Stones absolutely murdered their halftime performance because they are the epitome of classic rock, even in their 60’s!

Whether you are a Who fan or not, there is not denying that these dudes stole the freaking show back at Super Bowl XLIV with timeless hits like “Pinball Wizard,” “Baba O’Riley,” ” Who Are You,” and the always incredible “Won’t Get Fooled Again.” And that moment when Roger whipped out his harmonica for an unforgettable “Baba O’Riley” solo, just before the band breaks out into the greatest “Who Are You” performance ever? INCREDIBLE.

Despite bad blood between fans and Pete Townsend, there is no denying that the Who totally owned this stage with effortless and seemingly ageless talent- as if no time had passed…proving once again that classic rock OWNS this stage and should every.single.year.

Tom Petty and the Heartbreakers

The Heartbreakers commanded the stage at the Super Bowl XLII with lead singer Tom Petty performing classics like “American Girl,” “Free Fallin’,” “Won’t Back Down” and “Runnin’ Down A Dream” that had the crowd wild with excitement. Lacking theatrical gimmicks and accented with a cheering crowd, Tom Petty was the right choice for this year’s show with a strong stage presence and incredible, live vocal texture.

Ending with a crazy good “Runnin’ Down A Dream” version displaying highly underrated, killer electric guitar work by Mike Campbell, Tom Petty and the Heartbreakers became known as one of the greatest Super Bowl performances in history- as it should.

Absolutely innhilating the Super Bowl XXXIX Halftime Show in 2011, with his just a guitar and a mic, the one and only Paul McCartney takes the stage without his Beatles bandmates. Initiating the performance with Beatles hit “Drive My Car,” Paul has the crowd in a daze with his untarnished and timeless vocals, “beeping” his way into the hearts of America one verse at a time.

Every single person watching or attending the event thought they had it made when Paul started out, but then he surprised the crowd with one of the greatest live versions of “Get Back (JoJo)” that we have ever heard. With all eyes on him in the center of the lit up stage, Paul resembles a beacon of hope for classic rock and a chance to relive great memories for all fans, no matter their age.

From covering Wings song “Live And Let Die” beautifully at a piano to ending with a soft, crowd- filled serenade that will give you chills of “Hey Jude,” Paul was unstoppable in this particular performance with perfectly projected vocals that captured the attention of the world. Proving that music is not about fancy dance moves, performances and costumes, Paul shines as a simple and incredible talent that doesn’t ask for much- despite what he continues to give the world.

THE GREATEST LINEUP KNOWN TO MAN: A FANTASY

Now, that we have explained, in detail, why classic rock is the ultimate contender for the halftime show more than convincingly, we would like to share our fantasy line-up with you that would pretty much leave our hearts full, never asking for anything ever again.

So, picture this- Robert Plant, John Paul Jones, Jimmy Page and Jason Bonham open up with “Stairway To Heaven,” the most famous rock star song of all time as Page proceeds to annihilate his most famously epic solo in rock history. Merging into some bluesier Zeppelin songs like, “When The Levee Breaks,” “Baby Come On Home” and “Bring It On Home,” the godfather of the talk box, Peter Frampton emerges to play the hits with the greatest band of all time.

After these unforgettable sets, Freddie Mercury‘s hologram appears along side Brian May to create the most legendary virtual performance of all time to perform “We Will Rock You” alongside Robert and the guys and the great Peter Frampton.

We know this will never happen unfortunately…. but it’s nice to dream isn’t it?? Here’s some pictures just to get your imagination flowing!

Freddie Rippin’ It Up With Frampton!!

Could you imagine?? Leave us a comment to let us know which classic rock artist you think would steal the show!!