Flashback: Prince Brings The House Down With Explosive “While My Guitar Gently Weeps” Solo 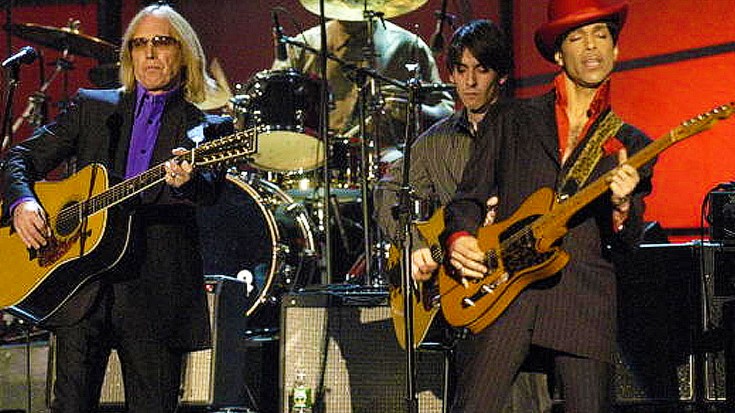 …Did He Really Make That Guitar Disappear?

While we’re laughing and crying over our favorite memories of Prince today, another legendary moment in his life comes to mind – and believe us, this is one you don’t want to miss! In 2004, Prince was officially inducted into the Rock And Roll Hall of Fame along with late Beatle George Harrison, and the end of the night saw Prince take the stage with Harrison’s son Dhani and fellow rock giants Jeff Lynne (ELO), Steve Winwood (Traffic, Blind Faith), and Tom Petty for an all-star performance of “While My Guitar Gently Weeps”.

Fiercely powerful as the men onstage and their audience remembered the “quiet Beatle,” the performance took a turn for the purple when Prince stole the show with an electrifying two minute guitar solo that’s widely believed to be one of the best of his entire career.

Fun Fact: Prince played over 27 musical instruments, but his skills as a guitarist have been celebrated by everyone from Eric Clapton to Steve Vai.

Dressed in a smart black suit with a red shirt and matching fedora cocked over one eye, Prince’s solo was full of the theatrics and technical skill that made him the fiercely respected musician we knew him to be, and if his solo wasn’t quite rock and roll enough for you, his magical exit from the stage as the final note rang out is sure to make you throw up your hands in absolute amazement that such a person really existed.