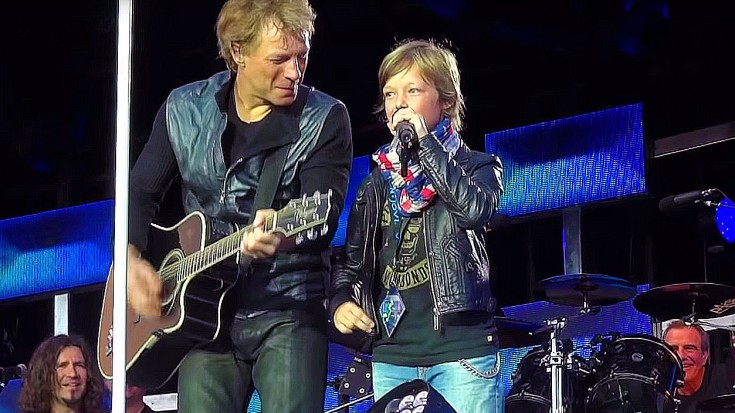 It’s always a treat when our favorite rockstars have hearts as big as their voices, and Jon Bon Jovi is no exception! On a crisp Friday night in 2013, Jon gave one of his youngest fans the chance of a lifetime when he brought 11-year-old Marco Kappel onstage for a killer performance of ‘Wanted Dead Or Alive’ that blew everyone away, especially Jon and drummer Tico Torres!

Jon picked the boy from the crowd after spotting his sign that read, “Jon do you dare to rock with me ‘Wanted’ on stage?”

At 11, he’s a tiny version of Jon; with his shaggy blonde hair, leather jacket and American flag bandanna, Marco’s resemblance to his idol extends into his gift for entertaining, belting out ‘Wanted Dead Or Alive’ as Jon accompanies him on guitar and pointing the mic at the crowd and having them sing along.

Fun Fact: Since his big debut with Bon Jovi in 2013, Marco has made a name for himself, with a wildly successful YouTube channel where he performs covers of his favorite songs.

Judging by the mile wide grin on the faces of the guys in Bon Jovi, it’s clear that little Marco’s performance was a huge success, and I don’t know who had more fun – Marco or the band! Jon was more than happy to step back and let Marco run the show for a little while, and if that isn’t the mark of a great rockstar and an even greater human being, I don’t know what is!