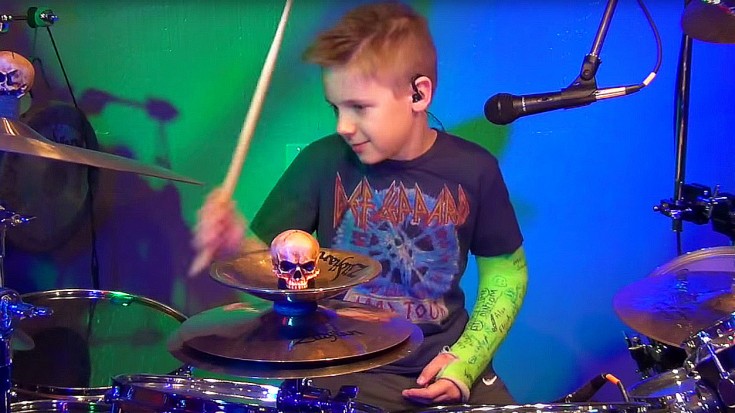 It’s been a long few weeks for YouTube drum sensation Avery Molek; in between laying down some seriously sweet covers of our favorite rock classics, he found himself in a basketball game and unfortunately broke his left arm! Never fear, though: not only is Avery back in action, but he’s literally doing it with one hand, making him not just insanely talented but incredibly admirable. It’s not surprising, then, that for this week’s drum cover Avery decided to pay tribute to Brit rockers Def Leppard – whose drummer Rick Allen famously lost his left arm in a car crash in 1984 – with a cover of “Animal” that while seemingly simple no doubt shows off the tremendous skill and passion that Avery possesses.

He’s always been great about showing his idols love, but it’s this quote taken from his YouTube page that drives home both his dedication as a drummer and his respect for those who paved the way, especially Def Leppard drummer Rick Allen:

“I got to meet Rick Allen at a KISS concert sound check. He’s a nice guy and a great drummer. Now that I tried playing one of his songs with my arm in a cast, I REALLY appreciate just how awesome Rick’s playing is. This was NOT easy! Much respect Rick Allen!”

Humble, driven, and incredibly talented are the only words we can think of to describe him! This cover absolutely rocks, but we can’t wait to see Avery heal up and go right back to jamming with both arms. Get well soon, Avery!