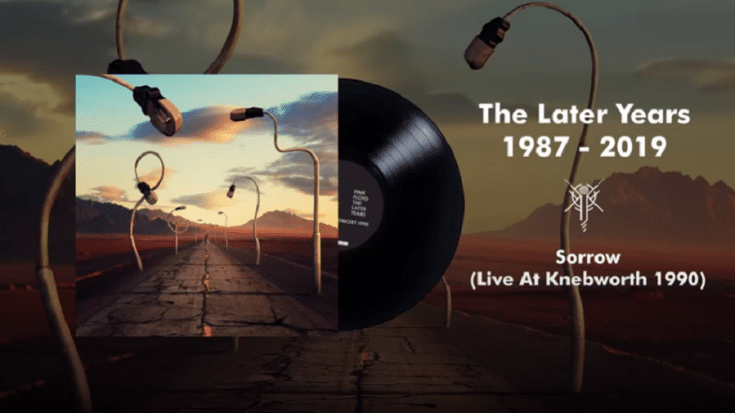 Pink Floyd just shared a live version of “Sorrow” from The Knebworth Festival in 1990. Included on their “Syd, Roger, Richard, Nick and David – An Evolving Pink Floyd Playlist” which features rare tracks, “Sorrow” was the closing track of their 1987 LP “A Momentary Lapse of Reason.”

The band tweeted: “The final addition to our evolving playlist is a live version of Sorrow from the 1990 Silver Clef Award Winners Show at Knebworth. Rain & wind didn’t dampen the band’s enthusiasm even with Mr Screen taken down as a safety measure in the weather conditions.”

Written by David Gilmour, he shared in the Pink Floyd podcast series The Lost Art of Conversation that “the moment the whole lyric for ‘Sorrow’ came to me like magic from nowhere. I sat down and just basically wrote down five verses for a song which I had no music for. … I’ve never done it that way round before — it’s always been music first. With ‘Sorrow,’ the words came first and then I wrote the music to fit it, and went in and demoed it and put it all together in the studio. That, for me, was the moment when I thought we were all in the clear; it was the direction we wanted to be going, and it was a good song. It gave context to the other songs and made me have confidence in where we were going.”