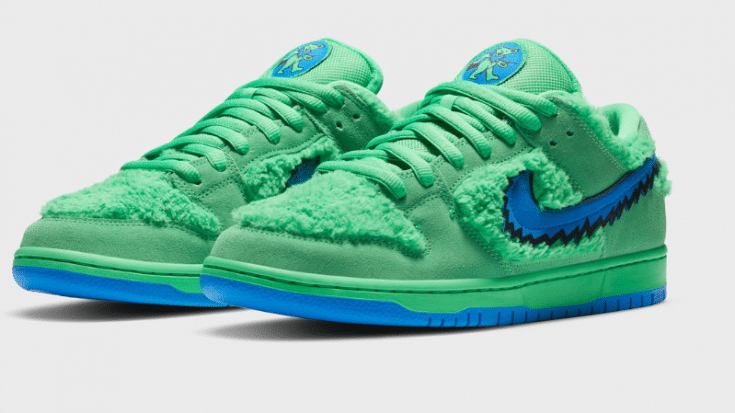 Nike has unveiled a new line of shoes inspired by the Grateful Dead. The collection, named Nike SB Dunk Low Grateful Dead, comes in three different vibrant colors and features the band’s iconic dancing bears which first appeared on the back cover of their 1973 live album “History of the Grateful Dead, Volume 1 (Bear’s Choice)”.

Retailing at $110 per pair, it has a faux-fur and suede exterior, a bear on its outer tongue, and a special feature is a small zipper pouch on the inner tongue which could be used to store weed. Nike added another detail – the Steal Your Face skull on the underside of the sockliner.

Archivist and legacy manager David Lemieux said in a statement, “As the band’s benefactor, Bear was an incredibly huge part of the Grateful Dead’s ability to become who they were. They were talented musicians, but they would not have had the financial freedom to forgo jobs, move to Los Angeles and practice for 14 hours a day. The band wouldn’t become what it is today without Bear’s innovations and contributions.

The orange Nike SB Dunk Low Grateful Dead will be available on July 18 via FTC Skateshop while the green and yellow versions will follow on July 24 via Nike’s app SNKRS.

Soon to be released. pic.twitter.com/ke8wwRWdOu