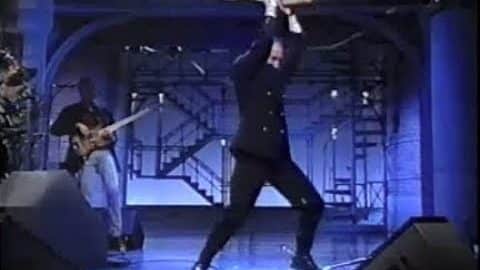 Of course we all know Pete Townshend is a great guitarist, but his singing voice is still very underrated. If you want to check out this rocker’s vocals you have to watch his performance of the Who’s classic “Pinball Wizard” on the Late Show with David Letterman dated back on June 17, 1993.

“Pinball Wizard” is a song written by Townshend himself and it was featured on the Who’s 1969 album Tommy. As he ended his set on Letterman, Townshend smashes the guitar, which obviously what became his signature ending in his every performance.

Letterman jokingly said, “Mr. Townsend that will be deducted from your fee tonight” and asked how the guitarist begin busting up stuff. Townshend explained:

“I wanted to play the clarinet. My father was a clarinet player and when I was about 8, he let me play the instrument and I couldn’t get a sound of it and he said ‘well maybe you could try the instrument that I started on’ which was the guitar so I said ‘well that would be good’ and I waited a few years, and when I was 11, Christmas came and my father was a good musician and I expected him to buy me a fine instrument.”

However, his father didn’t and instead his grandmother bought him a “cheap Italian guitar,” and his father kept saying that he will buy him a better one so he thought the only way to do that is to have an “accident” and that’s how he started busting things up.

Then the interview ended with him promoting his 1993 Psychoderelict album. Watch the full episode below.