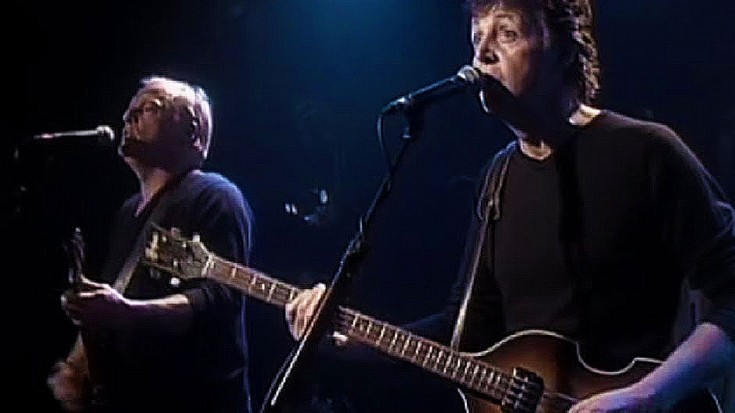 Rock legends and lifelong friends David Gilmour and Paul McCartney have worked together in the past, sure – but there’s just something about actually seeing them perform live together that just makes us smile. In 1999, the pair reunited at Liverpool’s Cavern Club where, with the help of Deep Purple drummer Ian Paice, McCartney and Gilmour took the audience on a high-octane ride through McCartney’s Run Devil Run – an album of 50s covers intermingled with a few originals.

The night wasn’t complete, however, without the footage you’re about to see; immortalized on the concert film Live At The Cavern Club, fans got the throwback of all throwbacks when Paul and David launched into The Beatles’ iconic “I Saw Her Standing There” that immediately got the audience on its feet and dancing, looking for all the world like the excited teens they were when The Beatles first burst onto the scene a lifetime ago.

Fun Fact: The first live recording of “I Saw Her Standing There” (a slow version of the song) was made at the original Cavern Club at the end of 1962.

Paul is having the time of his life, and the addition of David Gilmour and the guitar solo that kicks off right around 1:45 really kicks the whole performance into overdrive, turning this Beatles classic into the duet we never knew wanted and now that we’ve heard it, can’t stop listening to it! Check it out in the footage below – this blast from the past is sure to get you movin’!