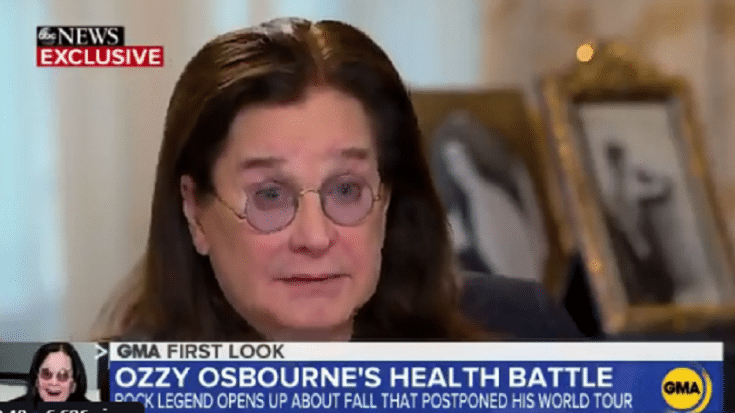 It Won’t Stop Him From Touring

In an interview on “Good Morning America” which aired on Tuesday, 71-year old Ozzy Osbourne and his wife Sharon revealed to Robin Roberts that the Prince of Darkness was diagnosed with Parkinson’s Disease last February. Ozzy said, “It’s been terribly challenging for us all. I did my last show New Year’s Eve at The Forum. Then I had a bad fall. I had to have surgery on my neck, which screwed all my nerves.”

Sharon added, “There’s so many different types of Parkinson’s — it’s not a death sentence by any stretch of the imagination, but it does affect certain nerves in your body. And it’s, it’s like you have a good day, a good day, and then a really bad day.”

He is currently on medication and will be undergoing immune therapy in Switzerland.

Ozzy spent most of 2019 recovering from his health issues and he had to postpone several dates in his No More Tours 2. Speaking about his fans, he said: “I feel better now that I’ve owned up to the fact that I have a case of Parkinson’s. I just hope they hang on and they’re there for me because I need them. They’re my air.”

Even with these struggles, Ozzy is looking forward to a busy year especially touring. He admitted, “I just can’t wait to get back out on the road again. I ain’t done yet, I ain’t gonna go anywhere yet.”

Ozzy’s No More Tours 2 will kick off on May 27 at the State Farm Arena in Atlanta, GA. His upcoming album Ordinary Man is due for release this February.

GMA FIRST LOOK: @RobinRoberts sits down with rock legend Ozzy Osbourne as he opens up about the fall that postponed his world tour. The full exclusive interview tomorrow on @GMA. https://t.co/YgfBrfobu0 pic.twitter.com/o0l3ltSWhq