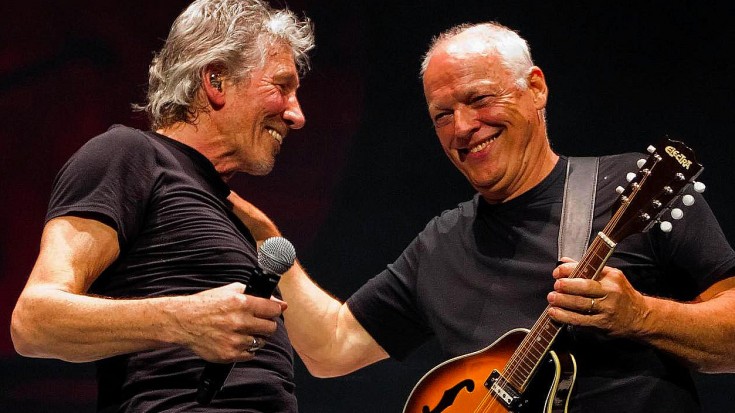 Together Again For One Night Only!

For two people who haven’t gotten along since sometime in the 1970’s, Pink Floyd’s Roger Waters and David Gilmour are absolutely amazing together. Despite their many, many issues with each other that aren’t likely to ever be resolved, Waters and Gilmour have written some of the most beautiful, iconic music the world has ever seen and to see them working together on a classic like ‘Comfortably Numb’ is enough to send chills down your spine.

Fun Fact: This reunion was a one-off, and no one but the band knew when it would take place – fans had no idea if their tour date would be “the one” or not!

Together with drummer Nick Mason, the three surviving members of Pink Floyd took the stage together for an emotional performance of ‘Comfortably Numb’ that left the crowd absolutely stunned. While another reunion is not likely something we’ll ever see again, it’s good to know that these two really can put their differences aside for the music!

Is there anybody in there?
Just nod if you can hear me.
Is there anyone at home?
Come on now
I hear you’re feeling down.
Well I can ease your pain
Get you on your feet again.
Relax.
I’ll need some information first.
Just the basic facts.
Can you show me where it hurts?

There is no pain you are receding
A distant ship smoke on the horizon.
You are only coming through in waves.
Your lips move but I can’t hear what you’re saying.
When I was a child I had a fever
My hands felt just like two balloons.
Now I’ve got that feeling once again
I can’t explain you would not understand
This is not how I am.
I have become comfortably numb.

O.K.
Just a little pinprick.
There’ll be no more, ah!
But you may feel a little sick.
Can you stand up?
I do believe it’s working, good.
That’ll keep you going through the show
Come on it’s time to go.

There is no pain you are receding
A distant ship, smoke on the horizon.
You are only coming through in waves.
Your lips move but I can’t hear what you’re saying.
When I was a child
I caught a fleeting glimpse
Out of the corner of my eye.
I turned to look but it was gone
I cannot put my finger on it now
The child is grown,
The dream is gone.
I have become comfortably numb.