One Man Band Jams Rush’s “Tom Sawyer” – All By Himself 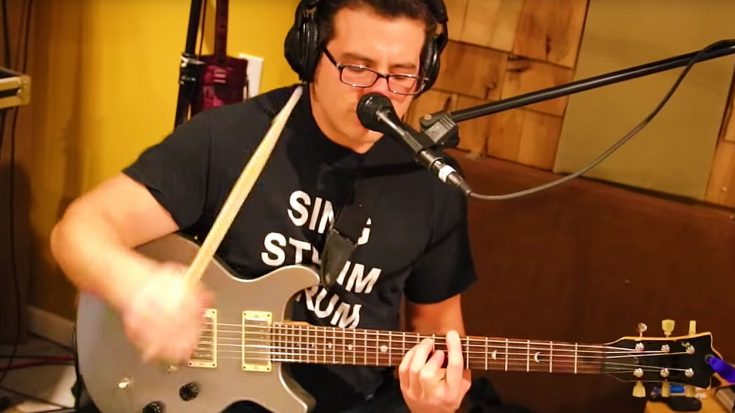 Rush’s “Tom Sawyer” is difficult to play for anyone who isn’t Geddy Lee, Alex Lifeson, or Neil Peart – so when we heard that there was a guy who played the entire song by himself, naturally we went running to see what the fuss was about. Turns out, he’s well worth the fuss; known as The Solo Trio, multi-instrumentalist Dominic Fragman attacked the 1981 progressive rock epic from three angles – vocals, guitar, and drums – and where other musicians would have recorded each part separately and spliced them together in post production, Dominic is unique in that he actually does all three at one time and sounds amazing while doing it.

Yep, you read that right: when we said ‘multi instrumentalist,’ we actually meant ‘one man band,’ which is exactly what Fragman is. He first made headlines a few short years ago with his performance of Black Sabbath’s “War Pigs” and hasn’t looked back since, his YouTube channel amassing several thousand hits from people dying to see what this one man music machine is capable of. If you’re wondering how something like this is possible – and how Dominic even got started, he was kind enough to sit down with TeamRock and explain it all:

“It began with just drums and guitar together, around the age of 10,” Fragman told TeamRock. “Initially, I operated the guitar with both hands, with the right foot on the bass drum and the left on the hi-hat.

Eventually I got comfortable enough to grab a stick and a pick with the right hand, and it went from there.”

Needless to say, Dominic rocks pretty hard! In the month since the video debuted it’s amassed over half a million hits, and it seems like everyone and their mother has seen it – except for Rush. “That would be amazing and very humbling,” he said. “I wonder how they would feel about it. Maybe it will make it to Rush – that would be rad!”