Okay, If You’re A Die-Hard AC/DC Fan… You Are The Problem… Here’s Why! 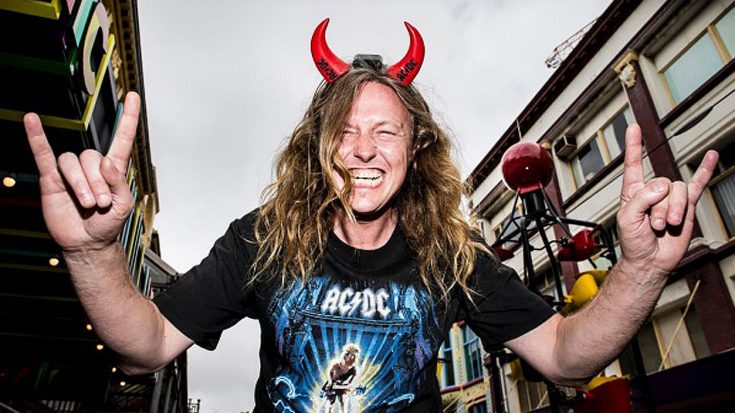 Well… It’s The Truth And SOMEBODY Had To Say It!

Okay, let’s get one thing straight. I’m just as much of an AC/DC fan as you are. In my opinion, they are one of the most consistently awesome rock bands that has ever graced a stage. That being said, I have a bone (or many bones) to pick with “die-hard AC/DC fans”. Because let’s face it, if you’re one of those people, you are the problem. Here’s why. Let’s start with the fashion sense.

Look, I get it. Angus Young is cool. He is a master at the guitar and can literally melt your face with any lick or solo he plays. He is also very obviously known for his signature stage attire. Red tie, white button up shirt, blue coat, blue cap, and, probably most notably, the blue short shorts. It’s iconic.

Here’s the thing, only Angus Young can pull it off! You may think you look cool, but other people are just laughing at. With you… but at you. It doesn’t matter how much you wax or exfoliate your legs, no one wants to see them. I mean, okay, maybe SOME people do, but I don’t, and I think speak for a LOT of people when I say that we don’t want to see you in short shorts, bro. So if you’re going to a concert, an AC/DC shirt and jeans are just fine. Even the Brian Johnson cap is modest and tasteful and most importantly, it let’s people know that you’re an AC/DC fan without showing us you’re upper thigh. But anyway, onto my next point, the singing!

So let’s talk about AC/DC’s lead singer Brian Johnson. Brian Johnson is undoubtably one of the most uniquely and aggressively innovative singers/frontmen in all of rock. Provided that he had to fill the large shoes of late AC/DC singer Bon Scott, Brian Johnson proved that he is very bit as much AC/DC as any singer was. Brian Johnson is very famous for his super high pitched screaming vocal range, which fans seem to like to mimic… Guess where I’m going with this…

So you… yes you… the fan, like AC/DC. And look, yes, I get it. I like them too, and it’s not that I mind you singing along to the song at a concert, but let’s say that you and I are in the car, I’m driving and on the radio comes Back In Black. I rejoice in the fact that I’m about to hear this epic song and you probably do, too. So picture that we hear the opening riff and Brian Johnson is about to start singing, right as he does, from YOU, I hear…

And I hear this in the most high pitched, ear piercing screech I’ve ever heard and it startles me so much that I almost get us into a car accident. My point is this. When you try to sing along to his singing, you’re loud, ear piercing, and in this case… DANGEROUS! So again, if you’re at a concert, that’s different, it’s loud and there’s really not much damage you can do, but when you’re listening through an iPod, walking down the street, or heaven forbid we’re driving, don’t try and sing like him. You’re just screaming and ruining the good music.

Okay, my final point here and them I’m done… For now…

So, the duck-walk may seem kind of silly on paper, but Angus Young has included this legendary walk into his onstage arsenal and has made the seemingly sillily stage walk into an iconic trade mark. But remember what I said earlier about Angus Young being the only one able to pull this off? Well, this is just another example of that same concept!

Imagine that you’re with a group of friends and you’re all jamming to some AC/DC, and there’s that ONE GUY, we all know one, he decides to get us and try to do the duck-walk, and without missing a beat (literally), he falls right on his butt! Sure it’s funny to watch, but there’s also the one friend that will try it and maybe not fall, but proceed to just fail at it and make everyone around him watching it feel super awkward. So unless you’ve been practicing it and you know you have the duck-walk mastered, spare us the awkward spectacle of watching you fail miserably.

SO… in conclusion, if you’re an AC/DC fan, that’s perfectly okay! AC/DC is an amazing band and one of my personal favorites. Just keep in mind the all the things I just talked about.

So thank you for reading my abnormally long rant! And remember! Practice being an AC/DC fan safely!