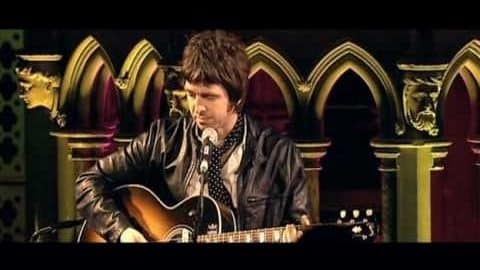 The infamous Noel Gallagher smashed guitar that took place the night Oasis split up was sold for £325,000 at an auction recently held on May 17, which is approximately $403,536 worth.

The guitar had a starting price of €150,000, but was actually sold for less than the projected amount that auctioneers would go as high as €500,000. The Gibson ES-355 was the guitar Liam Gallagher allegedly broke after the heated confrontation with his brother right before the time Oasis was about to headline 2009 Rock en Seine festival in Paris.

The show was canceled along with the rest of their scheduled performances and resulted for Oasis to officially call it end. Although reports said Liam ended up storming out of their dressing room and came back wielding Noel’s guitar around “like an axe,” he denied it and said it was the other way around.

“It’s with some sadness and great relief to tell you that I quit Oasis tonight. People will write and say what they like, but I simply could not go on working with Liam a day longer.”

After the incident, the Gibson ES-355 was restored by Phillippe Debreuille, who also worked on Jeff Beck, Iggy Pop and Mark Ronson’s instruments according to Guitar World. It was said to be Gallagher’s “most important guitars” and was his favorite instrument from 1996 to 2011.

The guitar was sold with its original hard case and a letter of authenticity signed by Noel Gallagher. According to the auction host, Artpeges Gallery, it “symbolizes on its own the soul and the history of the group: smashed in the last storm of Aug. 28, 2009 at the Rock en Seine Festival, it embodies the intense and tumultuous career of the most iconic 90s group.”

Take a look at some photos of Noel Gallagher’s Gibson ES-355 below, before and after it was restored. 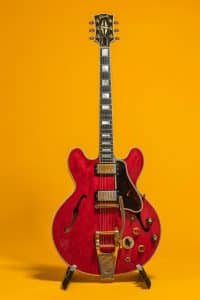 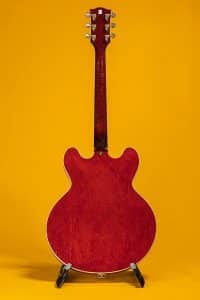 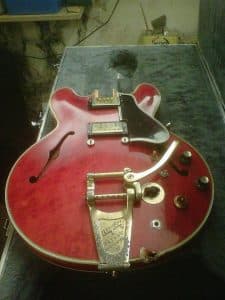 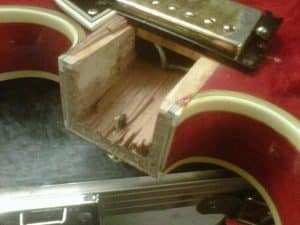