News: Axl Rose Rumored To Be Vocalist On The Next AC/DC Album 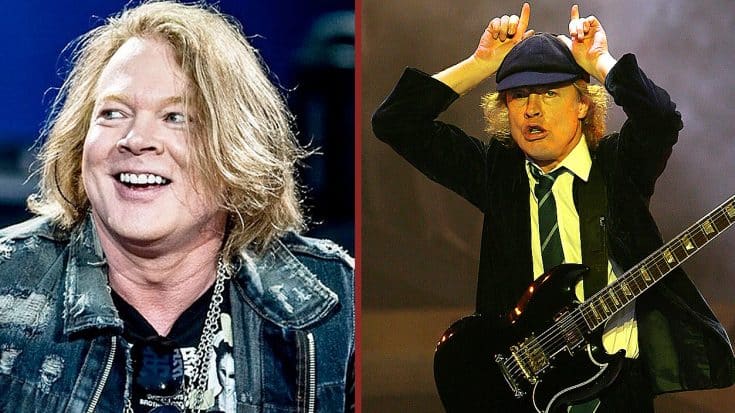 New Album Reported To Drop In 2018, And Featuring Axl Rose?

Incase you’re unaware, it was last year that AC/DC frontman Brian Johnson had to step down from the band due to unforeseen hearing problems. The singer that would take his place would be Guns N’ Roses frontman Axl Rose who is still singing and touring with the band today.

The original intention for Axl Rose’s position in the band was basically to just fill in for Brian Johnson until he healed up to get back on the road. However, it looks like Axl Rose is here to stay. Not only that, but now rumors are circulating that AC/DC are back in the studio and Axl Rose will be the featured vocalist.

The rumors started when an Australian news source called Noise11 made this statement.

“The chemistry between Axl Rose and Angus Young has inspired Angus to start planning another AC/DC record, but Guns N’ Roses’ touring commitments throughout 2017 will make it difficult to finalize the project.”

This raises a lot of questions. Mainly of which being “what does Brian Johnson think about this? Was he even asked to return?” I can only suspect that if this really does happen, and regardless of how good the album is, this’ll have quite a backlash, simply because it’s not Brian Johnson.

What do you think of all of this? Are you excited to hear Axl Rose sing for AC/DC on an album? Are you not? Let us know in the comment section!