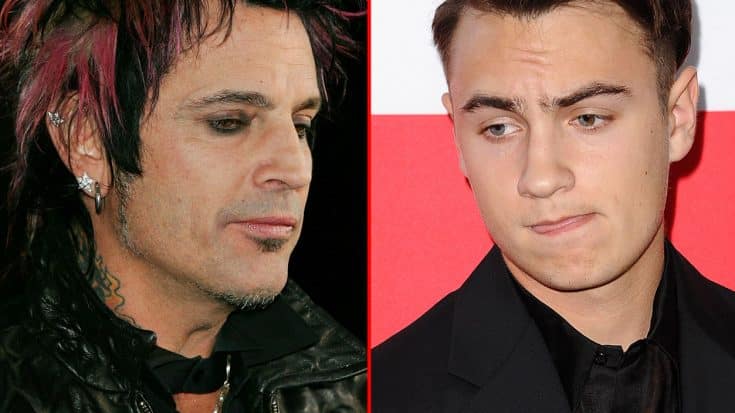 After much speculation as to what caused the violent altercation between ex-Mötley Crüe drummer Tommy Lee and his 21-year-old son Brandon earlier this week, it looks like we’ve finally got an answer.

This afternoon, TMZ released the 911 call in which Lee’s fiancée, 31-year-old Vine star Brittany Furlan, called for police and paramedics after Tommy was knocked out by his son’s punch. The 911 dispatcher instructs a panicked Furlan to roll Lee onto his side to prevent him from swallowing any blood in his mouth, and in between status updates she explains what happened.

According to Furlan, Tommy and Brandon were arguing after Tommy posted unflattering photos of Brandon’s mother, Pamela Anderson, to social media; the fight escalated when Brandon pushed Tommy and after being asked to leave, sucker punched his dad in the mouth. You can also hear Furlan say that Brandon had “guns in his room” and that she got scared and locked herself and Tommy in their bedroom for safety.

This explains Tommy Lee’s social media update last night in which he claimed that he and Furlan were in bed when Brandon burst into the room and assaulted him:

Hey @TMZ maybe get your facts straight before you go reporting bullshit. My fiancé and I were in bed when my son busted into the room and assaulted me. I asked him to leave the house and he knocked me unconscious. He ran away from the police. THAT’S the truth.

As we reported yesterday, Tommy Lee and son Brandon were involved in a domestic altercation late Monday night that ended with Brandon punching his father. Lee initially posted to Instagram, saying “My heart is broken. You can give your kids everything they could ever want in their entire lives and they can still turn against you” before ending the post with a sarcastic “Good job Brandon! Great son! @brandonthomaslee” and tagging Brandon’s personal Instagram account.

The photo, showing Lee’s bruised and bloodied lips, has since been pulled from Instagram.

As of the time this post was written it’s been reported that Tommy Lee is, in fact, pressing charges against Brandon, though  TMZ reports that he “absolutely acted in self-defense”.

This is a developing story, with audio provided by TMZ; stay tuned to Society of Rock for more updates and details as they become available.