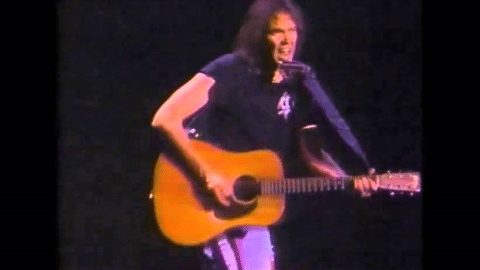 Written by Neil Young, Rockin’ in the Free World was originally released on his 1989 album Freedom and is widely considered as one of Young’s finest musical moments. There are two versions of this classic – an acoustic arrangement and an electric arrangement. Like most of his works, this has an interesting backstory.

It was in February 1989 while he was on tour. He was supposed to have a concert in Soviet Union but was told that it would not push through. Guitarist Frank “Poncho” Sampedro then commented, “We’ll have to keep on rockin’ in the free world” and the phrase somehow stuck to Young. Then he finished writing the lyrics the following day.

Sampedro recalled to Mojo magazine in 2018, “We needed a song. We needed a rocker. We’d written some songs and they were good but we didn’t have a real rocker. I said, ‘Look man, tonight, get in your room, think about all this stuff that’s going down – the Ayatollah, all the stuff in Afghanistan, all these wars breaking out, all the problems in America… “Keep On rockin in the free world,” you got that: put something together man, let’s have a song!’ And the next morning, we got on the bus to leave and he says, ‘OK, I did it!'”

Since its release, it has been used in several political events but Young has always been very particular about who uses his songs.