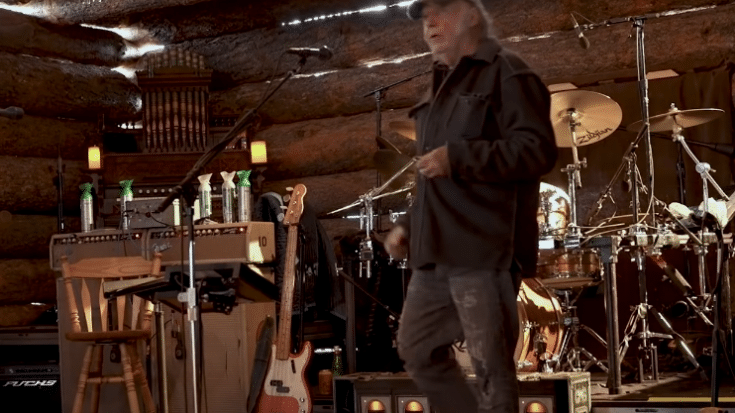 “BARN. A Band. A Brotherhood. A Barn.” as director Daryl Hannah described the documentary film BARN by Neil Young released on Thursday, January 20.

The statement read that the documentary:

“catches a rare intimate glimpse of this legendary band as they make music in a restored 19th-century log barn under the full moon. The film captures Neil and the Horse in an organic way, their easy irreverent humor, their brotherhood, and of course their music, as it was created. BARN intentionally lingers on single shots for entire songs, showing there are no tricks, revealing the raw, organic, and spontaneous process of the music bursting to life from unexpected moments. Exquisite changes of light and weather dance in the remote meadow where the barn sits, adding a sweet, mystical magic as the music thumps, reverberates, and echoes. The film is infused with the gratitude and joy that permeated the whole experience.”

The docufilm focus on the making of the latest Neil Young with Crazy Horse album, Barn, that was released on December 10, 2021.

Young began recording Barn in June of 2021. Earlier this year, he said on his website:

“We are so happy to be back in the barn, a barn built to replicate the 1850s barn that had collapsed in exactly the same place, high in the mountains of Colorado. It’s an exact replica of the original, built with Ponderosa pines by Ted Moews and his great crew of artisans.”

“These are new times, with new songs and feelings after what our world has been through and continues to face. This music we are making for our souls. It’s like fresh water on a desert. Life is going on.”

Along with Barn, Young also recently released records from his vault such as the 1975 album Homegrown along with the live albums, Young Shakespeare from 1970 and the Way Down in the Rust Bucket from 1990.

Watch the documentary film BARN below.