Neil Young Hates This ONE Thing So Much, He Wants You To Break The Law To Get It 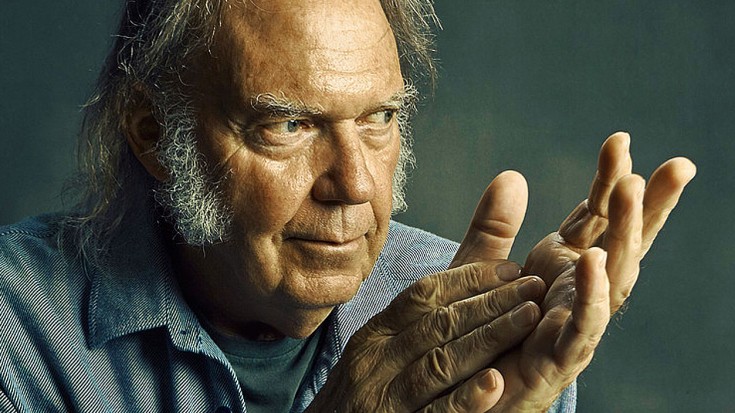 It’s no secret that in the music industry, Neil Young is one of rock’s last surviving rebels. He’s picky about where his music is sold and streamed, he hosts his own yearly concert Farm Aid with the help of Willie Nelson and John Mellencamp – he even invented his own hi-res music download service and digital media player, PONO. Now, in a world where musicians are dependent on streaming and mp3 sales, Neil Young is not only saying no to mp3s as an artist by only making his work available via CD, vinyl and PONO files, but hates them so much that in an interview last weekend with comedian Marc Maron Young not only suggested fans technically break the law by illegally downloading his work – he encouraged it.

“We want everybody to have it. I don’t give a s—. Yeah, it’s like, I can’t sell that crap. Go make it yourself and take it home,” said the 70 year old singer-songwriter.

Taking it one step further, Young even encouraged fans to rip his latest album Earth straight from Tidal, currently the only streaming network with rights to his work. He even told fans how to do it, and the benefits of doing it that way versus hunting down mp3’s:

“If you wanna get it, I think they play the whole album on Tidal in a couple of weeks. Go onto Tidal and just record it off of Tidal! It’s gonna be 44.1 [kHz]. So that way everybody can get it, ’cause I’m not selling them. I’m not selling the MP3. When I start talking like that, my manager shows up.”

Naturally, we don’t endorse any kind of piracy – artists should be paid for their work, and if you wouldn’t steal something from a store outright then you definitely shouldn’t steal from artists, especially ones you love. However, in an age where more and more artists and bands are relying less and less on music sales and leaning more towards touring and alternative forms of making a living off of their art, maybe Neil’s stance isn’t too far fetched, after all.