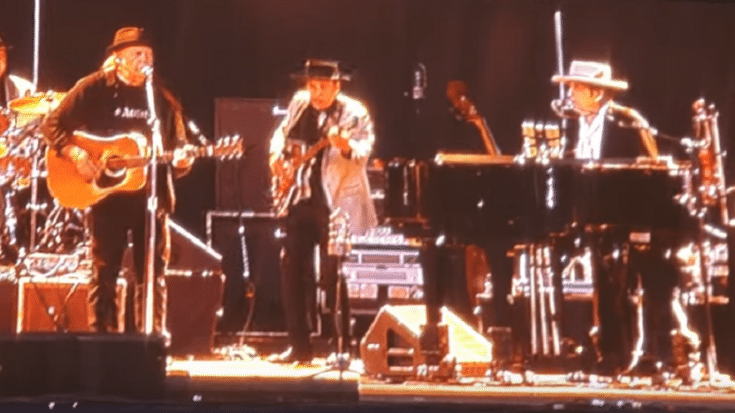 We Need More Of This Collaboration!

The last time rock legends Neil Young and Bob Dylan sang together was in October 1994 at Roseland Ballroom in New York City. And for the past few weeks, fans have been hoping for a duet since they were both in Europe for separate tours and even co-headlined a show at London’s Hyde Park. Some audience members were disappointed they didn’t have any collaboration but as it turns out, it’s all worth the wait.

On July 14, they co-headlined another show at Nowlan Park in Kilkenny, Ireland. And they took to the stage together to perform “Will the Circle Be Unbroken” – the first time in over two decades. The song is a popular Christian hymn and Dylan recorded his solo version and played it in his coffee house shows in 1961. He covered it again in 1967 with The Band for The Basement Tapes. The last time he performed it live was at a Houston Rolling Thunder Revue concert in 1976.

It was in 1975 when Young played it for the first time with Dylan at the SNACK Benefit at Kezar Stadium in San Francisco. Young has even covered the song a handful of times and sometimes with Willie Nelson.

We’re hoping they’ll have more duets for us in the future!