Neal Schon Recalls The Reasons Behind Steve Perry’s Split Journey, And How ‘Stupid’ They Were… 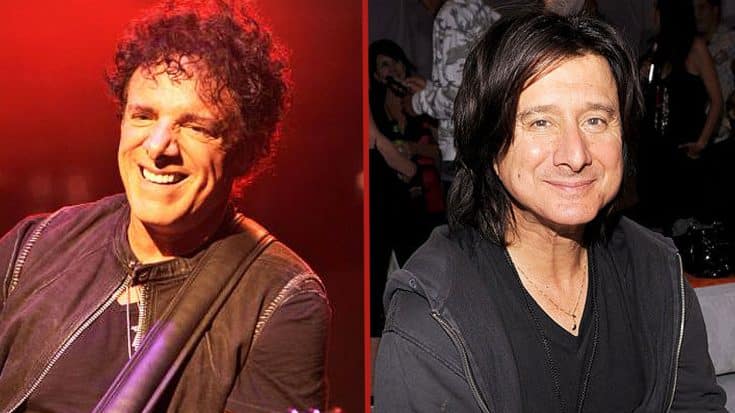 We are now well past the Rock & Roll Hall Of Fame Induction Ceremony and as you may know, Journey headlined the event taking their well deserved and LONG overdue place in the hall. Something else you may know is that Steve Perry was actually at the event and gave a heartfelt speech in acceptance. He also reunited with his past bandmates including guitarist Neal Schon.

After the event, Rolling Stone Magazine caught up with the guitarist and discussed many, many things, one of them being the initial reasons for Steve Perry’s split from the band. Neal Schon was pretty vague, but gave insight as to why it all went down.

“At the end of Journey, around Trial By Fire [in 1996] or even Raised on Radio [in 1986] we were having a falling out as far as the direction of the band. It was more or less like that. There were a lot of other issues going on that were kind of stupid looking back. I’d hoped we’d put everything aside and get back to our great friendship that we always had, the admiration and respect we had for one another. I felt like that was definitely there. Some of his friends were in the room with my wife and I, and they snapped some photos. People can genuinely see that he was very happy and so was I. Every picture tells a story.”

The good thing that we can take away from this is that it was nothing but positive vibes at the ceremony. It’s truly comforting to know that Steve Perry is happy even after all of these years.

As of right now, it doesn’t look like Steve Perry has any intentions to reunite with the band. Nevertheless, they are all on great terms, but hey, who knows what the future holds? Fingers crossed!