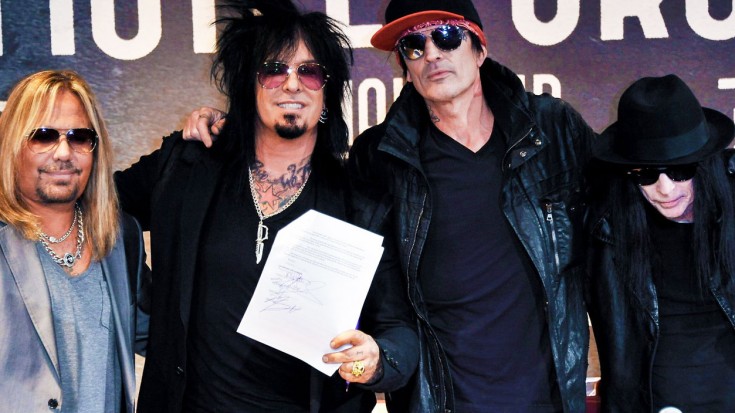 “There was nowhere to go, really, except to stop.”

We said goodbye to Mötley Crüe 6 months ago and while everyone – most of the band included – was eager to shut the chapter on their 34 year career, it seems that there’s one person who’s unhappy with the way things ended. Drummer Tommy Lee, who last week lashed out at his former bandmates for not saying goodbye following Mötley Crüe’s final show on New Year’s Eve and at bassist Nikki Sixx for unfollowing him on Twitter, is back with another set of grievances to air and this time, it’s about the music.

According to Tommy, the reason Mötley Crüe decided to call it quits was due to certain bandmates not wanting to move forward with new music – though he won’t say which bandmates are responsible.

“I can remember experimenting on a couple of our last Crue album efforts and getting resistance from other band members, saying things like, ‘Well, our fans, if it’s a Harley-Davidson they know they’re going to get a Harley-Davidson, and you can’t give them a beefed-up weird version of that.’

So there was nowhere to go, really, except to stop.”

Strangely enough, he’s not the only member of Mötley Crüe to feel this way; in February, Nikki Sixx echoed the same sentiments, saying that by the time the final show rolled around, the band “ceased to run on creativity, just on pure, mechanical motions.”

What a sad way to end such a massive legacy, but I guess that’s what happens when you’ve been through as many things as Mötley Crüe has. Hopefully the guys can find a way to mend fences before it’s too late, even if it’s not through music – 3 decades of friendship is a lot to throw away once the curtain comes down and the music stops.