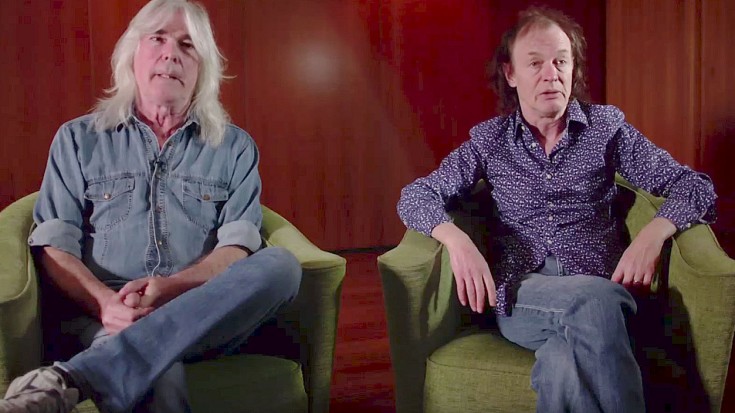 AC/DC’s officially more than halfway done with the European leg of their Rock Or Bust Tour, and surprisingly, not only has new frontman Axl Rose not done anything characteristically Axl – storming offstage, assaulting the crowd, showing up late – but according to his new bandmates, he’s proven to be quite the asset to rock’s most celebrated bands! Fans saw Angus Young and bassist Cliff Williams stopping by to chat with Classic Rock Magazine, where the normally quiet pair let loose and had a few laughs with their interviewer as they updated the world on how their tour is faring.

With just two weeks left to go before the tour wraps in Düsseldorf on June 15, Angus and Cliff shared a few thoughts on their new frontman, including their favorite part of having him along for the ride:

“With Axl, we’ve been able to mix up quite a few songs – do a few older ones, put them in – which we haven’t done in a number of years,” says Angus.

“We used to get a setlist, and that would be us for a tour. So now we’ve got a lot more adding and putting in different tracks, and the fun part is when we get there on the stage, and seeing it come to life.”

Wow – despite all the backlash they’ve received in the weeks and months since they announced Axl’s role as their new lead singer, it really does seem like rock’s reformed bad boy has been a tremendous breath of fresh air for AC/DC. No word yet as to future plans as far as another album or even as to the state of the band when AC/DC’s newly rescheduled North American Rock Or Bust dates wrap, but if the high praise Axl’s received from his new bandmates is anything to go by, then we have a feeling we’ll be seeing – and hearing – a lot more of Axl in the future!