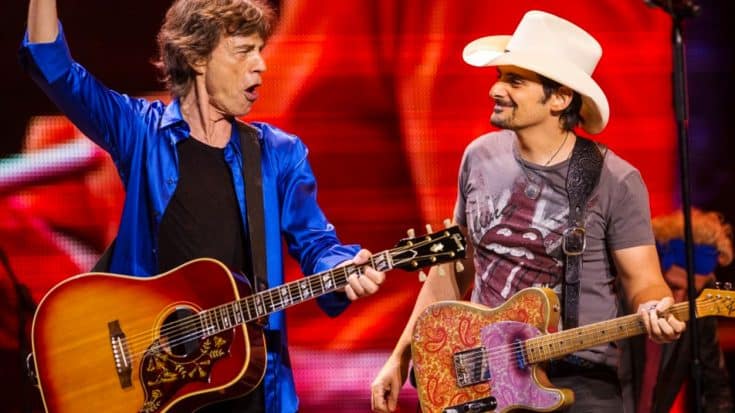 From Steven Tyler to Van Morrison, it seems like more and more of our beloved rock artists are venturing into the country music world and believe us – we don’t mind, not by a long shot. The latest to make his foray into all things Nashville is Rolling Stones singer Mick Jagger, who joined country star Brad Paisley on the newly released track “Drive of Shame” from Paisley’s brand new album Love And War, released last week to great fanfare.

Fun Fact: Paisley and Jagger struck up a friendship after Brad joined the Rolling Stones on stage in Philadelphia in 2013 to play “Dead Flowers,” from Sticky Fingers. The rest, as they say, is history.

Described by Rolling Stone Magazine as a “rollicking” track that puts a mobile spin on the famed “walk of shame” so many of us have made after a night of questionable behavior, “Drive of Shame” brings together the best of both worlds as Jagger lends his trademark rock and roll vocals to Paisley’s signature country twang laced with a little bit of that Keith Richards magic in his guitar playing, resulting in a song that proves to be one hell of a good time no matter where you fall on the rock vs. country debate. Check it out in the audio below and as always, let us know what you think!