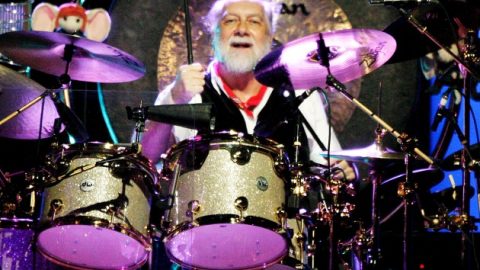 Fleetwood will not only serve as an executive producer, but will also contribute “creative ideas” and music to the series, which follows a fictitious rock legend Jasper Jones and his band, The Grift.

The story goes decades later when the aging rock star is being diagnosed with terminal cancer. Jasper is given only a few months to live and as a final love letter to his fans, he reconnects with his band to write and record 13 final songs and leave his mark on the world forever.

Jonathan Prince (Four Weddings and a Funeral) and Will Reiser (50/50) will serve as writers on “13 Songs.” Along with Fleetwood, Willie Mercer and Ron West of Thruline Entertainment, Gillian Bohrer of Megamix, and David Blackman of Polygram Entertainment will also executive produce. Lionsgate and Fox Entertainment will produce. No premiere date has been announced yet.

In 2013, Fleetwood Mac canceled the 14-stop Australian and New Zealand leg of its world tour after bassist John McVie was diagnosed with cancer. The band also rescheduled their 2021 North American tour dates to 2022 due to the pandemic. Their last studio album was in 2003 before Lindsey Buckingham left the group in 2018.