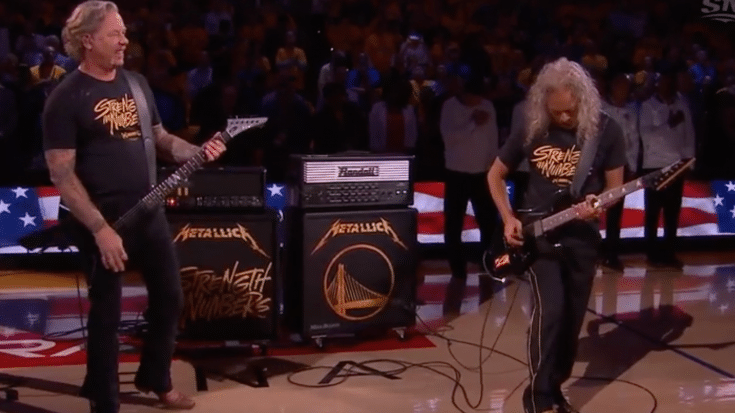 As reported yesterday, Metallica performed a rockin’ version of The Star Spangled Banner ahead of the Game 3 of the NBA Finals at the Oracle Arena between the Golden State Warriors and Toronto Raptors. The guitar duo James Hetfield and Kirk Hammett always show support for Bay Area teams which is why they wore GSW’s Strength in Numbers shirt.

Even if they’re only half of Metallica, they sure pumped up the crowd before the game! Even those tuning in on their TVs at home went crazy about their performance. Twitter user @ZimGMS wrote:

“as a neutral spectator to this game, and not really a Metallica fan….that was a sick anthem, warriors by 16+”

The Warriors’ line up was without Kevin Durant and Klay Thompson but Stephen Curry played aggressively from the start. Unfortunately for them, Metallica weren’t able to recreate their magic the last time they performed the National Anthem before a GSW game. The Warriors lost 109-123.

Legendary band Metallica get the crowd ready for Game 3 as they play the USA National Anthem pre-game 🇺🇸#NBAFinals pic.twitter.com/kcr507momu