Metallica And Lady Gaga Gear Up For Explosive Grammys Duet – Wait, What?! 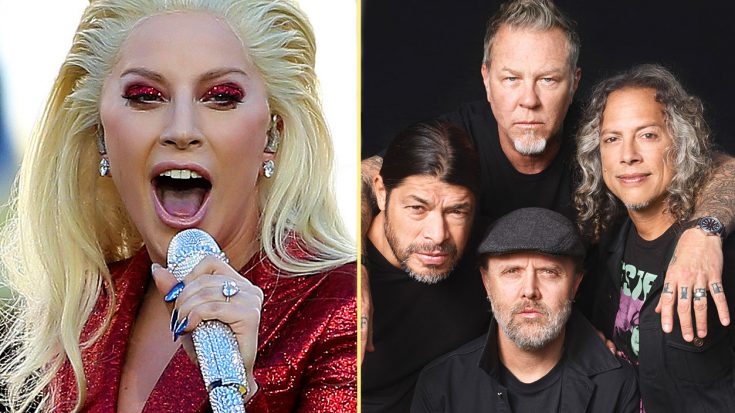 See It Unfold On Sunday, February 12!

It’s been a busy week for Metallica and an even busier one for Lady Gaga; still recovering from an illness that warranted a doctor forbidding him to sing even a single note, Metallica’s James Hetfield is finally feeling better and gearing up to head back stateside with his bandmates to prepare for Sunday night’s Grammy Awards, and after a whirlwind week that saw her tear it up at last weekend’s Super Bowl halftime show Lady Gaga is showing no signs of slowing down as she prepares to make her own return to the Grammys…with Metallica.

That’s right: Metallica and Lady Gaga are teaming up for an explosive duet at this weekend’s Grammy Awards, raising more than a few eyebrows as the news was announced this morning after a fan spotted a Grammy ad announcing the unlikely pairing. Seem strange? Relax, it shouldn’t – it’s no secret that Lady Gaga is a metal fan, having earned high praise from Iron Maiden’s Bruce Dickinson and fans who have spotted her at a few Iron Maiden shows on the band’s sprawling Book Of Souls tour can attest to the singer’s genuine appreciation for all things heavy metal.

Besides, we’ve heard Lady Gaga’s chops when it comes to good old fashioned rock and roll and based on the snippet of her singing Led Zeppelin’s “Black Dog” on The Howard Stern Show, we’re pretty confident in her ability to kill it when the moment arrives Sunday night. No word as to what she and Metallica will be performing, but somehow we have a feeling that it definitely will not be boring!