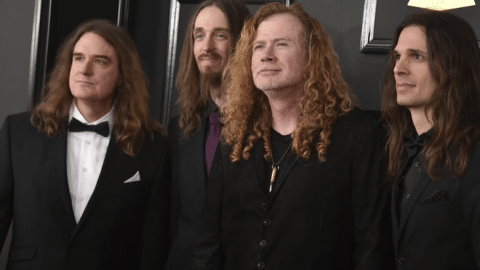 Megadeth has fired bassist and founding member David Ellefson following allegations of sexual misconduct. Sexually explicit videos of the 56-year old rocker along with screenshots of flirtatious messages exchanged with a woman made rounds on the internet earlier this month. There were rumors that he’d been grooming an underage fan.

“We are informing our fans that David Ellefson is no longer playing with Megadeth,” frontman Dave Mustaine wrote in a post on Megadeth’s social media accounts. “We do not take this decision lightly.”

“While we do not know every detail of what occurred, with an already strained relationship, what has already been revealed now is enough to make working together impossible moving forward,” Mustaine added. “We look forward to seeing our fans on the road this summer, and we cannot wait to share our brand-new music with the world. It is almost complete.”

Ellefson denied the allegations and even posted a statement from the woman involved who claimed that she wasn’t underage when the exchanges happened. However, both their statements have already been deleted and a few days after the messages first surfaced, Ellefson deactivated his Twitter account.

Megadeth is slated to kick off their tour with Lamb of God on August 20 in Austin. They are yet to announce a new bassist to replace Ellefson.