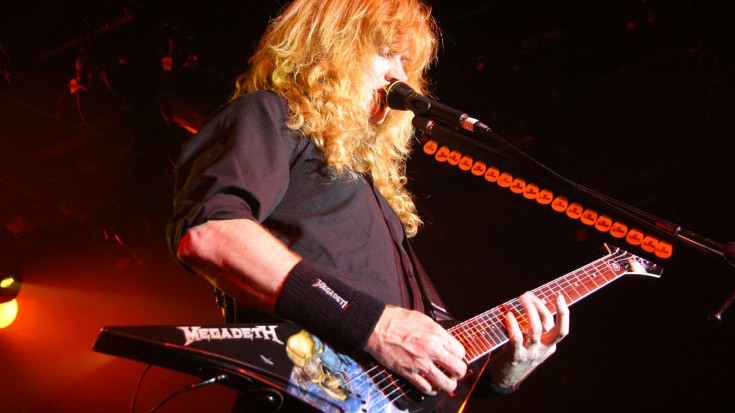 Written in 1990 and featured on Rust In Peace, Megadeth’s ‘Holy Wars…The Punishment Due’ goes down as one of the band’s most iconic works, with its unique song structure that shifts at 2:26 to a slower, heavier section after guitarist Marty Friedman’s acoustic bridge. It’s one of Megadeth’s biggest hits and a huge crowd favorite that always seems to amp up Megadeth’s audiences, which is probably why it’s still a concert staple for the band.

The band is incredibly precise, never missing a note even through their synchronized headbanging, but it’s what goes on separately within the band onstage that makes this performance so amazing.

This 1992 footage of Megadeth performing ‘Holy Wars…The Punishment Due’ is absolutely killer!

Dave Mustaine walks the line between being too cool to have fun and barely holding in a smile before he rips through another heavy passage, and bass player Dave Ellefson functions as the official hype man of thrash metal, getting the crowd excited while supporting Mustaine on backing vocals. Megadeth’s definitely a band whose individual parts always come together nicely for a killer show, never disappointing – and this performance is no different!

Fools like me, who cross the sea
And come to foreign lands
Ask the sheep, for their beliefs
Do you kill on God’s command?

A country that’s divided
Surely will not stand
My past erased, no more disgrace
No foolish naive stand

The end is near, it’s crystal clear
Part of the master plan
Don’t look now to Israel
It might be your homelands

Upon my podium, as the
Know it all scholar
Down in my seat of judgment
Gavel’s bang, uphold the law
Up on my soapbox, a leader
Out to change the world
Down in my pulpit as the holier
Than thou could be messenger of God

Wage the war on organized crime
Sneak attacks, repel down the rocks
Behind the lines
Some people risk to employ me
Some people live to destroy me
Either way they die, they die

They killed my wife and my baby
With hopes to enslave me
First mistake, last mistake
Paid by the alliance, to slay all the giants
Next mistake no more mistakes