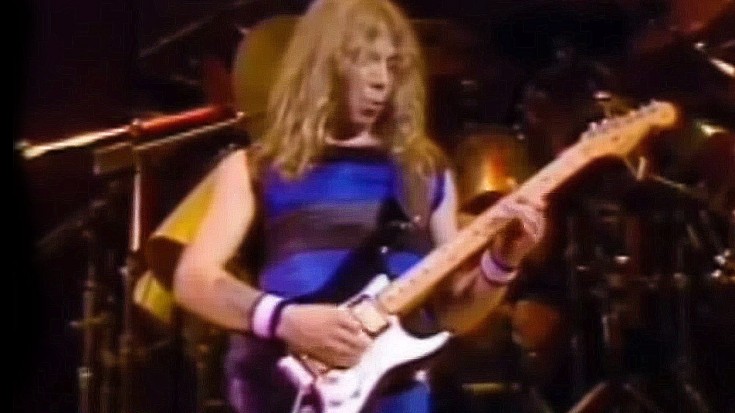 One third of Iron Maiden’s dynamic guitar trio, Dave Murray goes down in history as one of the most vicious guitarists in metal. Whether it’s him joining forces with Adrian Smith and Janick Gers to tear through ‘Caught Somewhere In Time’, or shining on his own the way he is in this lost footage from 1985, Murray is a tremendous force to be reckoned with when he picks up a guitar.

This lost footage is from Iron Maiden’s 1985 appearance at Brazil’s Rock In Rio, and is part of the band’s performance of ‘Powerslave’.

I don’t know what’s cooler: the fact that Murray is so at ease tearing through that solo or the fact that the audience is silent while he does it because they’re terrified of missing something amazing. Apparently, for drummer Nicko McBrain the solo was too awesome – about halfway through Murray’s solo, McBrain throws his drumsticks at him in a bid to get him to stop playing (or keep playing, we’re not sure), before Murray launches into the most vicious part of the solo…played with his teeth.

All in all, this is an absolutely killer performance and one of our favorite Iron Maiden moments. Check this one out – you won’t be disappointed!