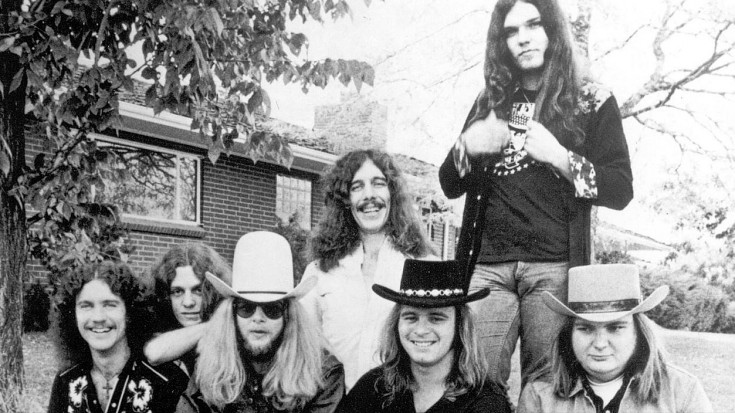 The guys in Lynyrd Skynyrd can tell a story like no one else! Whether it’s Gary Rossington and Rickey Medlocke sharing the hilarious origins of their band or the late Ronnie Van Zant spinning a yarn that left you laughing so hard you cried, there isn’t a Lynyrd Skynyrd song in existence that doesn’t stem from a particular story in the band’s rich history – including one of our favorites, “Gimme Three Steps”. 44 years after it was born in Doraville’s Studio One, “Gimme Three Steps” is just as timeless as the story that spawned it – and we wouldn’t have it any other way!

As the story goes, Ronnie was dancing with a girl at the bar when her boyfriend walked in and confronted the two. Ronnie, prompted by the sight of the man reaching for his boot, vowed that if a bullet was headed his way it was going to have to hit him “in the ass or in the elbows” as he ran out, asking the man to just give him a few steps to the door.

Recorded on March 29, 1973 at Doraville, GA’s Studio One, “Gimme Three Steps” was the result of a night out that nearly resulted in Ronnie being shot by a woman’s angry boyfriend at a local bar.

Wanting to commit the story to memory, Ronnie immediately set to work crafting “Gimme Three Steps” with the help of Allen Collins and Gary Rossington. One of Lynyrd Skynyrd’s first singles and sporting the B-side “Mr. Banker,” “Gimme Three Steps” didn’t actually chart upon its November 1973 release on Pronounced Leh-Nerd Skin-Nerd, but that didn’t matter. With its fast pace signifying Ronnie’s mad dash to the door, colorful lyrics and outstanding guitar work from guitarists Collins and Rossington, the song quickly became a massive crowd favorite and one that never ceases to get Lynyrd Skynyrd’s devoted legion of fans on the floor and dancing.