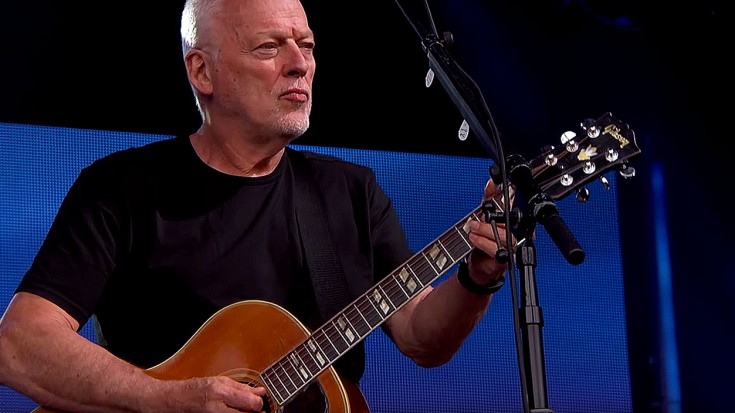 In between celebrating the success of his solo album Rattle That Lock with a sold out tour and making a pilgrimage back to Pompeii after 4 decades, the voice of Pink Floyd found time to make an extra special appearance on Jimmy Kimmel Live last night – one that featured Gilmour dazzling the crowd with an acoustic take on Pink Floyd’s “Wish You Were Here” that quite literally made us wish we were there the moment we saw it! Armed with only an acoustic guitar and his voice, Gilmour’s performance of “Wish You Were Here” was everything we wanted, but with one extra special touch; a steel guitar highlighting the empty space between David’s vocals and guitar playing!

Fun Fact: Both David Gilmour and the late Richard Wright have said that Wish You Were Here is their favorite Pink Floyd album.

The addition of the steel guitar gives this classic a lonely, Western kind of feel – the kind of feel that makes you think back to a point in your life that you just really, really miss and would give anything to go back to. Of course, no live version of “Wish You Were Here” would be complete without the solos that made us fall in love with it in the first place, and David absolutely delivers. If you missed the magic moment the first time around, never fear – you can experience it for yourself in the footage below!