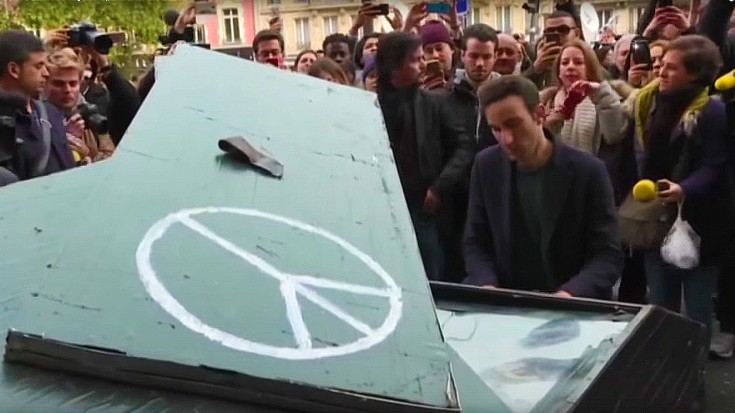 On the evening of Friday, November 13th the world was rocked when a series of coordinated attacks in Paris, France claimed the lives of 129 people. People, who while enjoying an evening of good music, good food, and a good soccer match had no way of knowing that armed gunmen and suicide bombers would bring about the worst instance of violence seen by France since World War II. When the dust settled and morning dawned on a badly shaken and grief-stricken Paris on November 14th, no one knew quite what to do; except for 34-year-old Davide Martello, that is.

Davide was in neighboring Germany when the attacks began at the Stade de France, and soon after made a 400-mile pilgrimage to Paris with his piano – on his bike – to try and offer some sort of comfort to his favorite city.

“I wanted to be there to try and comfort, and offer a sign of hope,” Martello told the Guardian.

In the face of unspeakable tragedy and amid the crush of ambulances and police trying to make sense of it all, Davide sat at his piano in front of the Bataclan concert hall where gunmen took hostages and opened fire on the crowd and began to play a sobering, emotionally charged rendition of John Lennon’s ‘Imagine’ – a sudden moment of calm in a city consumed by chaos.

“I can’t bring people back but I can inspire them with music and when people are inspired they can do anything. That’s why I played ‘Imagine,’“ says Martello.

Any fool can destroy; but to offer comfort, no matter how small, to your fellow man during an unfathomable tragedy like this is simply extraordinary.