Celebrating Joe Walsh’s 68th Birthday With His Greatest Song EVER! 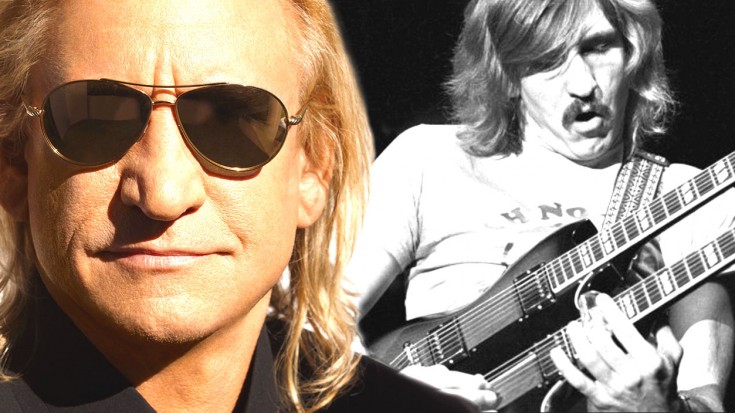 Joseph Fidler Walsh was born on November 20, 1947 in Wichita, Kansas to professional scottish pianist and mother Dora Jay Newton. Unfortunately, Joe lost his father Alden at just age 5 in a horrible plane crash, so we can just add that to the list of things that have made him the amazing man that he is today.

In high school, Joe was extremely interested in music, specifically the oboe that he played in the school band but he soon became heavily influenced by the Beatles and picked up the bass guitar for Montclair local band, the Nomads.

Once Joe located his true passion, he toured the Cleveland area while attending Kent State University with the Measles from 1965- 1967. In 1968, after having left the Measles, Joe was approached by a friend of James Gang guitarist Glenn Schwartz to recruit his as the bass player where he opened for Cream and the Who.

In 1970, Joe lost his little girl Emma, only 3-years-old to a horrific car accident just before he joined the Eagles; her mother, Stephany was driving the car. He wrote the song Song for Emma for his baby girl to honor her memory and Stevie Nicks even wrote “Has Anyone Ever Written A Song For You” dedicated to the pain Joe went through losing his daughter…

In 1971, Walsh left James Gang to form band Barnstorm consisting of greats Joe Vitale and Kenny Passarelli who was eventually replaced by bassist Chuck Rainey. In these years he recorded and released iconic rock hits “Turn To Stone” and “Rocky Mountain Way” which hit #23 on the US Top 40 Chart.

Once Barnstorm had its ride, Joe was contacted by the Eagles to replace Bernie Leadon and took the offer over replacing Peter Frampton in Humble Pie. “Hotel California” was Walsh’s first album with the Eagles which ended up taking a year and a half to finish that somewhat wore down on the band. Walsh could only withstand the controlling wrath of Henley and Frey for 5 years before the band broke up in 1980 so he decided to focus on his solo career after all of those years…

Joe has continued to play music this entire time, releasing 12 albums, some that have even featured the Eagles members. We have always loved Joe, his talent and the impact he has on our ears and hearts so it is with the greatest respect we say HAPPY BIRTHDAY JOE!!

Some fans may argue that Joe’s greatest song was “Rocky Mountain Way” and that may be true, however, this is our favorite!! Enjoy!

AND just to prove to you that Joe is getting better with age, we have also posted a 2015 performance of his infamous “Turn To Stone” that shows his voice has not aged a bit in the last 40 years and it’s honestly incredible!