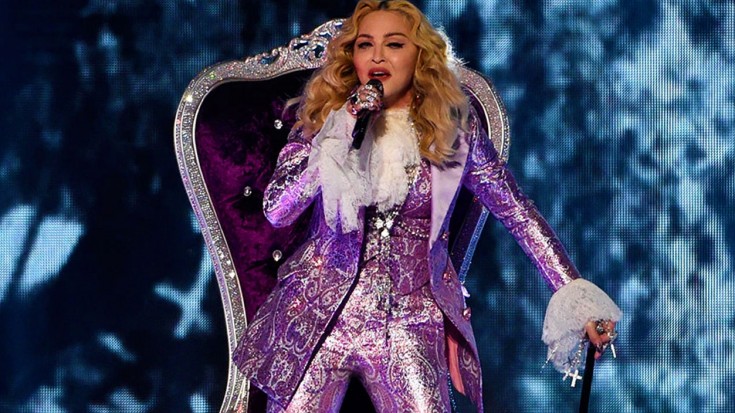 Oh, Madge. Just…oh. We wanted to love this, we really did.

Last week we reported on Madonna’s highly anticipated tribute to late musical visionary Prince, an event that was met with controversy long before she took the stage at last night’s Billboard Music Awards. Despite it all – the change.org petition to get another artist to perform the tribute, the raised concerns in the days leading up to the tribute she promised would be “very intimate” and “very respectful” – fans of both Prince, who died last month at the age of 57, and Madonna were willing to give the queen of pop the chance to shine and give Prince the loving sendoff he so deserved.

While not…terrible, Madonna’s 9 minute performance with special guest Stevie Wonder still wasn’t her finest hour. Featuring her take on “Nothing Compares 2 U” – a song that, while written by Prince, was actually made famous by Sinead O’Connor – followed by a singalong of “Purple Rain,” Madge’s performance resulted in a media firestorm almost immediately after the last note rang out, with viewers taking to social media to voice their displeasure with the tribute.

Here’s a snapshot of some of the responses to Madonna’s Prince tribute last night:

This is how I felt about #Madonna Prince Tribute pic.twitter.com/lq3Q8NG77C

They told me #Madonna‘s vocal tribute to #Prince@BBMAs was sang entirely in the key of u flat. I’m glad I didn’t watch. — Son of Baldwin (@SonofBaldwin) May 23, 2016

I stayed up for that? #MadonnaPrinceTribute#BBMAs

But of course, there were still fans and celebrities who loved it:

@Madonna, no matter what you do, there will always be haters. The #MadonnaPrinceTribute was stunning! #BBMAs ♥♬ pic.twitter.com/3s2pBllrka — Barry (@barendb1997) May 23, 2016

As a huge fan of both artists I can honestly say she NAILED IT. #BillboardMusicAwards #MadonnaPrinceTribute pic.twitter.com/3lIJ45NRS3

Check it out for yourselves in the footage below and as always, don’t forget to sound off and let us know what you think!