Little Freddie Mercury Hypes Up Crowd At Wembley – Too Cute! 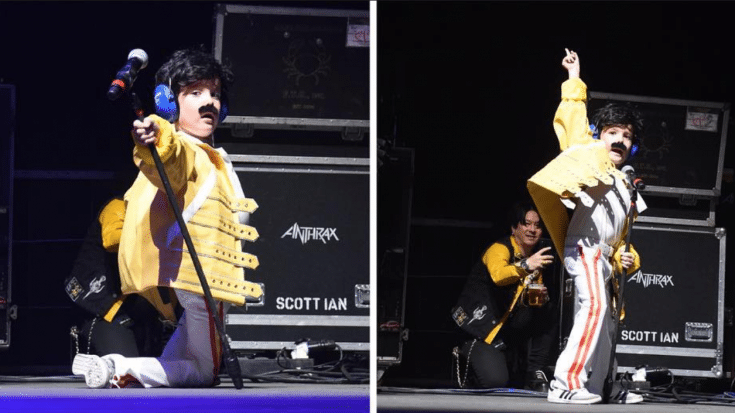 Freddie Mercury was alive and well this weekend – albeit a little smaller than we all remember – in London, taking the stage ahead of Anthrax’s set at Wembley Arena.

Of course it wasn’t actually Freddie, though he IS rock royalty; it was Revel Young Ian, a legend in the making who boasts Anthrax guitarist Scott Ian and country-rock powerhouse Pearl Aday as his parents, and the legendary Meat Loaf as his granddad.

The 7-year-old was on hand all weekend long as Anthrax raged through Ireland and London on Slayer’s farewell tour, decked out in his Freddie Mercury costume and ready to rock at a moment’s notice.

And rock, Revel Young did.

He hit the stage like he’s been doing it his entire life, little fist in the air and mastering the best of Freddie Mercury’s mannerisms. As much as we loved his performances, we’re not the only one who noticed that Revel’s got stardust and rock and roll in his blood; proud parents Pearl and Scott took to social media with photos and video, absolutely glowing with pride at having raised the coolest kid on the planet.

How cool is this? Any other kid would have frozen when his big moment came, but no – not Revel! If he’s this comfortable onstage now, we can’t even imagine how awesome he’ll be if he follows in mom, dad, and grandpa’s footsteps one day!