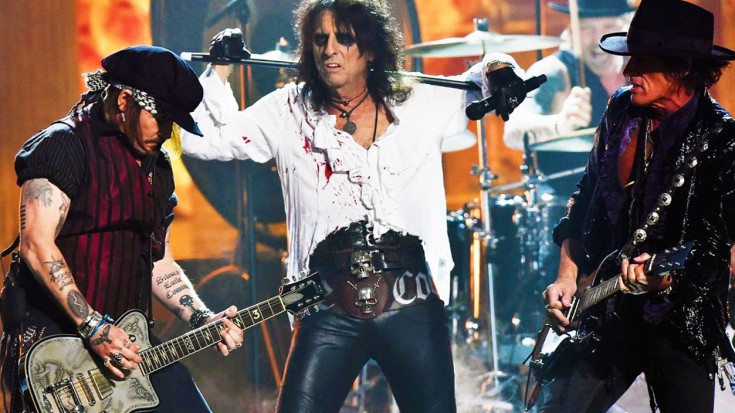 Now that’s what we call rock and roll!

Motörhead frontman and all around hellraiser Lemmy Kilmister may be gone from us in the physical sense, but we have no trouble believing that the “Ace Of Spades” singer was kicked back in rock and roll heaven last night enjoying a Jack & Coke as he watched the incredible tribute the Grammy Awards rolled out in his honor. Comprised of rock legends Alice Cooper, Aerosmith’s Joe Perry, Guns N’ Roses alumni Duff McKagan and Matt Sorum and acting royalty Johnny Depp, the Hollywood Vampires represent everything Lemmy loved – good times, good people, and good old fashioned rock n’ roll, and their electrifying “Ace Of Spades” tribute to the late Motörhead singer was a raucous celebration of a man who shaped careers and changed lives wherever he went.

Kicking things off for the supergroup was a darkened stage that held Lemmy’s touring rig: a Marshall half stack amplifier outfitted with his bass guitar, cavalry hat, boots, and jacket before the band, lead by singer Alice Cooper, launched into a performance of “Ace Of Spades” loud enough for Lemmy to hear wherever he may be.

Of all the blows dealt to the rock world as 2016 began, it was perhaps Lemmy Kilmister’s that proved to be the most paralyzing; despite a life that can only be described as a wild ride from start to finish, we somehow expected him to live forever – a permanent fixture as The Rainbow’s resident salty old rocker whose stories about life on the road make Keith Richards look like a Boy Scout.

However, it’s through all-star tributes like the one delivered by the Hollywood Vampires that ensure the survival of Lemmy’s legacy – not just as a larger than life rock icon worthy of Grammy tributes, but as the man the rock world knew and loved as a friend and mentor.