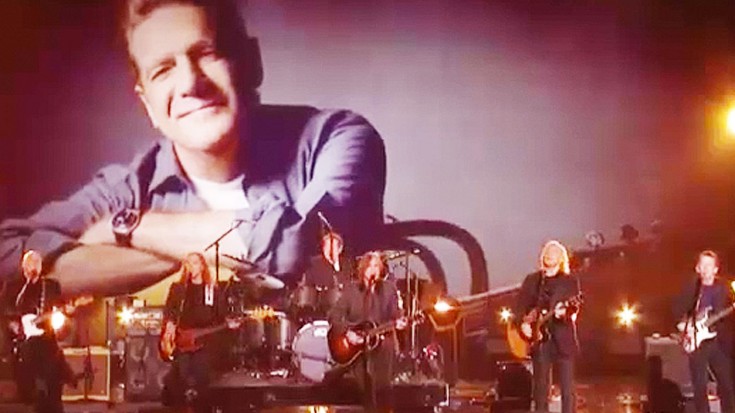 What is left of the legendary Eagles came together with singer and close friend Jackson Browne, to commemorate the brilliant mind of the loved and lost Glenn Frey. Performing hit near and dear to Frey’s heart, as well as Browne’s who helped co-write the song with him, “Take It Easy,” the stage was full of love and loss.

Interesting Fact: Browne turned “Take It Easy” over to Frey, who finished writing it and recorded it with the Eagles, who used it as the first song on their first album, and also their first single. Frey says that Browne did most of the work on the song and was very generous in sharing the writing credit. He described the unfinished version of the song as a “package without the ribbon.”

With Walsh, Schmidt and Leadon joining up with Henley once again, this tribute was much more than just what meets the eye to any standard fan. However, those that know the complex and complicated history of the Eagles, know that this was the first time both Bernie and Walsh had joined the stage as Eagles in quite some time, since they played the 2007 CMAs.

With the unfortunate but appropriate (mainly) lack of Eagle Don Felder, and of course Glenn Frey, the remaining Eagles gave the performance of a lifetime with the ultimate respect to lost member Glenn as they shared the unforgettable ballad of “Take It Easy” with the Grammy crowd.

Well I’m a-runnin’ down the road try’n to loosen my load
I’ve got seven women on my mind
Four that want to own me, two that want to stone me
One says she’s a friend of mine
Take it easy, take it easy
Don’t let the sound of your own wheels drive you crazy
Lighten up while you still can
Don’t even try to understand
Just find a place to make your stand, and take it easy

Well, I’m a standin’ on a corner in Winslow, Arizona
Such a fine sight to see
It’s a girl, my Lord, in a flat-bed Ford
Slowin’ down to take a look at me
Come on, baby, don’t say maybe
I gotta know if your sweet love is gonna save me
We may lose and we may win, though we will never be here again
So open up I’m climbin’ in, so take it easy

Well, I’m a runnin’ down the road tryin’ to loosen my load
Got a world of trouble on my mind
Lookin’ for a lover who won’t blow my cover, she’s so hard to find
Take it easy, take it easy
Don’t let the sound of your own wheels make you crazy
Come on baby, don’t say maybe
I gotta know if your sweet love is gonna save me

Oh, we got it easy
We outghta take it easy