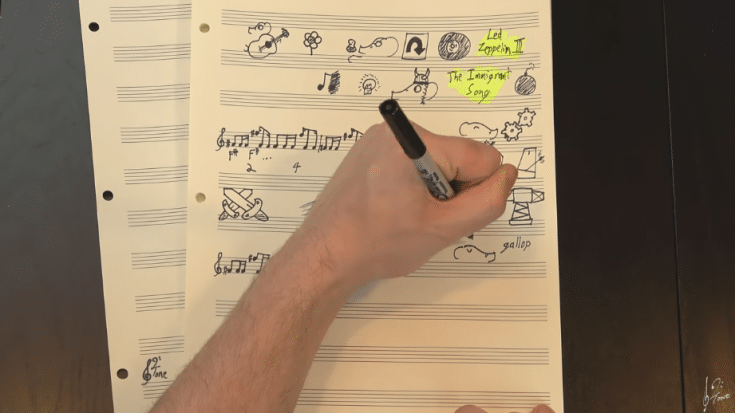 From The Land of Ice And Snow

12tone is a YouTube Channel that uses doodles to explain Classic Rock songs- on sheet music. A combination of visual and audible explanations turns complex songs into a whole bunch of “ah-ha!” moments. That’s a good thing given that lot’s of Classic Rock music has loads of convoluted meanings and compositional techniques. Led Zeppelin’s “Immigrant Song,” falls under the category that confuses theorists and musicians.

For those who do understand the song, 12tone’s doodle visuals will be a feast for the eyes . “Immigrant Song” is about Vikings. Totally badass in every way. The song was released on Led Zeppelin III in 1970 reaching #16 on the US charts. Led Zeppelin tied their touring schedule into Robert Plant’s love for history.

Robert Plant has explained his writing of “Immigrant Song,”

“We weren’t being pompous. We did come from the land of the ice and snow. We were guests of the Icelandic Government on a cultural mission. We were invited to play a concert in Reykjavik and the day before we arrived all the civil servants went on strike and the gig was going to be canceled. The university prepared a concert hall for us and it was phenomenal. The response from the kids was remarkable and we had a great time. ‘Immigrant Song’ was about that trip and it was the opening track on the album that was intended to be incredibly different.”

12tone wraps history, factoids, and music theory while touching on every Led Zeppelin instrument. Someone had to do all the hard work and this guy did it- for the love of music. He draws the music notes of  Jimmy’s intro riffs and Bonham’s drum patterns, as the music is playing. Then he directs the imagery towards the lyrics of the song. The doodles completely hone in your focus.

“It’s one of my favorite Zeppelin tunes, and it contains some hidden easter eggs that seem almost designed to confuse theorists like me.”

There’s a lot to learn and laugh at in this video. Yes, we know “Immigrant Song” is about Vikings but the way it was composed is a fresh perspective into a musician’s mind. Who doesn’t want to peak into the rock god mentality?