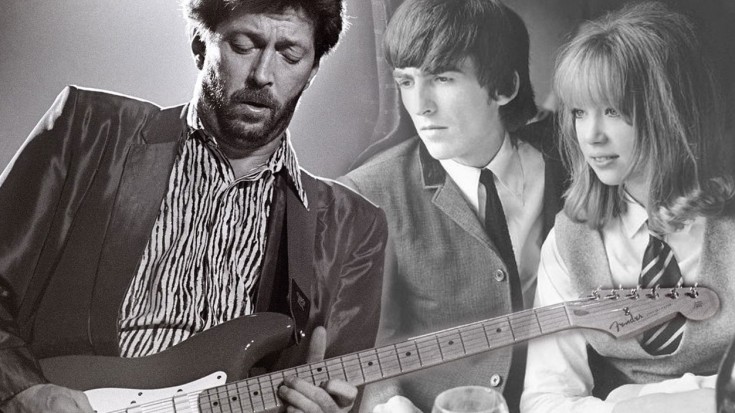 Clapton pleads for a married woman

Pattie said of the song: “I wasn’t so happy when Eric wrote ‘Layla,’ while I was still married to George. I felt I was being exposed. I was amazed and thrilled at the song – it was so passionate and devastatingly dramatic – but I wanted to hang on to my marriage.

After years of delay- in 1979, Eric Clapton finally married Pattie Boyd, the ex-wife of his friend George Harrison and the inspiration for the songs “Something,” “Layla” and “Wonderful Tonight.”

Boyd, first married to Harrison in 1966 befriended Clapton due to the friendship between the two musicians. Clapton became instantly infatuated with Boyd, and continued to pursue her in spite of his friends marriage.

After many failed attempts, Boyd ran into the arms of Clapton after her and Harrison split in ’74.

She and Clapton began living together and married in 1979. Clapton and Harrison remained good friends, with George playing at their wedding along with Paul McCartney and Ringo Starr.

What’ll you do when you get lonely
And nobody’s waiting by your side?
You’ve been running and hiding much too long.
You know it’s just your foolish pride.

I tried to give you consolation
When your old man had let you down.
Like a fool, I fell in love with you,
Turned my whole world upside down.

Let’s make the best of the situation
Before I finally go insane.
Please don’t say we’ll never find a way
And tell me all my love’s in vain.