“Klaatu”- The Mysterious Band That Sounded Similar To The Beatles 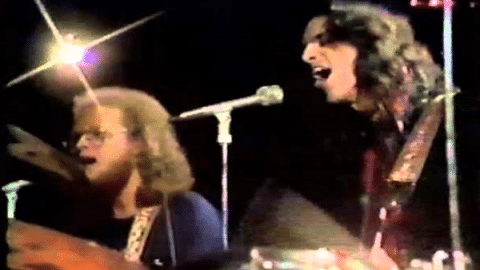 They Were Dubbed As A “Mystery Group”

Klaatu is a band most people have never heard of but for those who have, they thought they were The Beatles – at least, for a while.

Formed in 1973, the trio of bassist John Woloschuk, guitarist Dee Long, and drummer Terry Draper released their debut album titled 3:47 EST three years later in 1976. Aside from their psychedelic sound, their arrangements and melodies drew comparison to The Beatles. At the time, Beatles fans were still heartbroken over their breakup and in some ways, they held on to the belief that maybe all four members would reunited. So when they heard Klaatu’s music and the subsequent rumors, they thought The Fab Four indeed got back together.

3:47 EST had an interesting cover. There was nothing written on it except their name – even the production and songwriting credits only listed Klaatu. It received favorable reviews but sold poorly.

Then in 1977, an article written by journalist Steve Smith was published on The Providence Journal speculating that 3:47 EST was secretly recorded by The Beatles under a pseudonym. Capitol Records further ignited the rumors by being elusive to press questions or giving them non-answers – and when you think about it, it was a clever marketing move. The speculations persisted since Klaatu refused interviews and avoided public performances plus it was Capitol Records that released some of The Beatles’ album in the US.

Radio stations and the media fed “clues” and “hints” to listeners and went on to compare songs from Klaatu and The Beatles, pointing out their similarities. The surrounding mystery helped the album climb up the charts. Basically, curiosity boosted Klaatu’s sales.

Meanwhile, Klaatu didn’t care much about the rumors and though they were flattered, they didn’t take them seriously. UK’s New Musical Express countered the conspiracy theories by publishing an article titled “Deaf Idiot Journalist Starts Beatle Rumour.” To end the rumors, program director Dwight Douglas of commercial radio station WWDC in Washington, D.C. went to the U.S. Copyright Office and checked the records to see the real names of the band members.

When the world found out the truth about their identities in 1978, Klaatu received backlash even though they only wanted to wear their musical influences on their sleeves and nothing more.

Woloschuk told Goldmine Magazine, “Terry and I were really big fans of late ’60s progressive bands like King Crimson and The Moody Blues. We also really liked radio from that period, where we were exposed to a variety of really well-crafted pop songs. That really did make a big impression on us.”

Draper explained, “We were all big Beatles fans, and we were hoping they would reunite. At the time, the idea of a reunited Beatles wasn’t far-fetched at all.”

Long then added, “I think it is true that The Beatles rumor did us as much harm as good. It got us noticed, which was great, but also led to a situation where we could not ever really measure up to expectations.”

In the 1980s, Long met Paul McCartney and the latter called him “the chap from The Beatles clone band.” Long explained how they never intended for that to happen and they were merely heavily influenced by The Beatles. They talked for a while about music and life in general and Long described it as “An experience I will always treasure.”