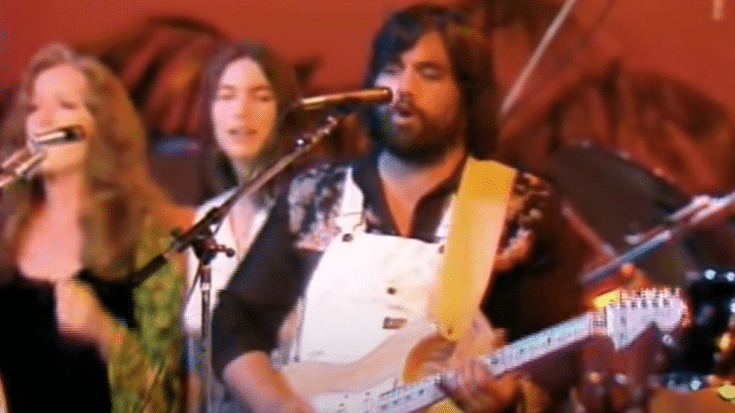 In 1977, Little Feat appeared on the music TV program The Midnight Special. They performed their signature song “Dixie Chicken” and were joined on stage by Emmylou Harris, Bonnie Raitt and Jesse Winchester.

“Dixie Chicken” is the title track to Little Feat’s landmark record – their third studio album released on January 25, 1973. The addition of new members altered their sound. Written by frontman Lowell George and Martin Kibbee (credited as Fred Martin), Kibbee got the idea for it after driving past an advertisement for a restaurant in Los Angeles. According to him, he already had the lyrics in his head by the time he got home.

To promote it, the band had a clever marketing idea. They delivered fried chicken to the radio stations with boxes that read “Finger Pickin’ Good” and not content with that, Lowell George dressed up in a chicken suit. Unfortunately, it took a while before the song became popular. The album sold poorly at first but it eventually achieved classic status.

In an interview with Guitar Player, George was asked about what he’d like to tell aspiring guitarists. He said, “The first thing is to consider one’s own vision of himself. Plan out what you like to do when playing the guitar, whether it’s writing songs, singing with the guitar, backing somebody up, or whatever. But you should figure out where you’re supposed to fit in the hierarchy of a group. Decide where you’re supposed to be. You have to fool around with that for a few years and not get discouraged and quit too early.”