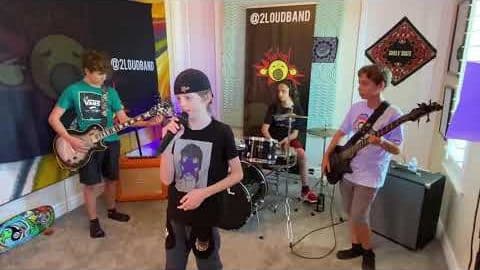 On the YouTube channel, Vedder Gabriel & 2 LOUD BAND, kids performed their own rendition of Dirty Honey’s When I’m Gone.

The video was uploaded on July 28, 2020 and has 3,141 views up to date. The kids have now 2K subscribers and their cover gain praises, some of the comments read:

“Boys this is so sick. Keep up the grind, you’ll make it big one day. Especially you vedder, your voice is fuckin killer”

“This is so cool, reminds me of the old days in the garage with my band. It’s good to see the youngsters interested in Rock & Roll… Keep it up boys”

In October 2019, Dirty Honey made a history by becoming the first group to be the #1 single as an unsigned act in 40 plus years of the Billboard’s Mainstream Rock Songs chart. They have proved that it’s possible to make it to the top in the music industry even without the a major label to back them up.

Since the success of Dirty Honey, it led them to be chosen as opening act for legendary groups like Guns N’ Roses and The Who.

Now, kids are looking up to them setting as an inspiration to play rock and roll.

Watch their amazing performance below and check their YouTube channel for more rock covers.