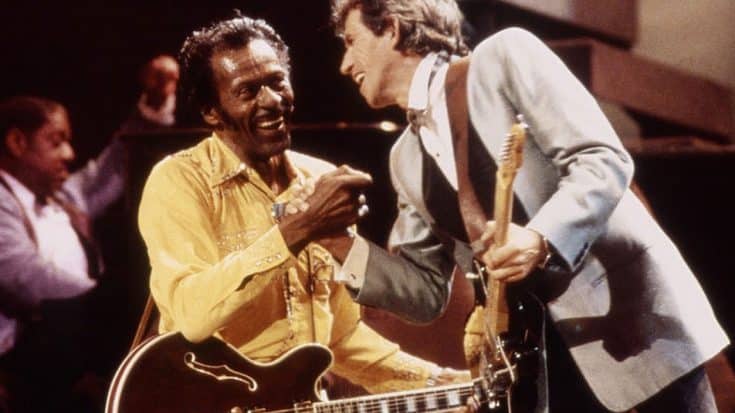 How Keith Became One Of Chuck’s Biggest Hits!

There are some things in life you just don’t do – wear white after Labor Day, talk about Fight Club, or touch Chuck Berry’s guitar. Rolling Stones guitarist Keith Richards learned that last one the hard way when he made the mistake of playing his good friend Chuck’s guitar after a show one night, without Chuck’s permission and while he was out of the dressing room! Keith is a great sport as he recalls to Jimmy Fallon the circumstances that led up to him becoming Chuck Berry’s ‘biggest hit’:

“His guitar was laid out in his case and I thought, “Oh come on, Keith, just a touch – maybe an E chord!”

Chuck walks in, says, “No one touches my guitar!” and punched me right in the face. And that’s Chuck’s biggest hit!”

Leave it to Keith Richards to get a giggle out of a painful situation. In the days and weeks following Chuck’s death at the age of 90, it was Keith we looked to for the best memories of the man we called the father of rock and roll music but who he had the privilege of calling not just his idol, but his friend. This interview is a few years old by now, but the sentiment hasn’t changed; friends and legends like Chuck come about just once in a lifetime, and like Keith we’re glad we got to live on this planet at the same time as he did.