Jon Bon Jovi Gives Fan Shock Of A Lifetime – You HAVE To See Her Priceless Reaction! 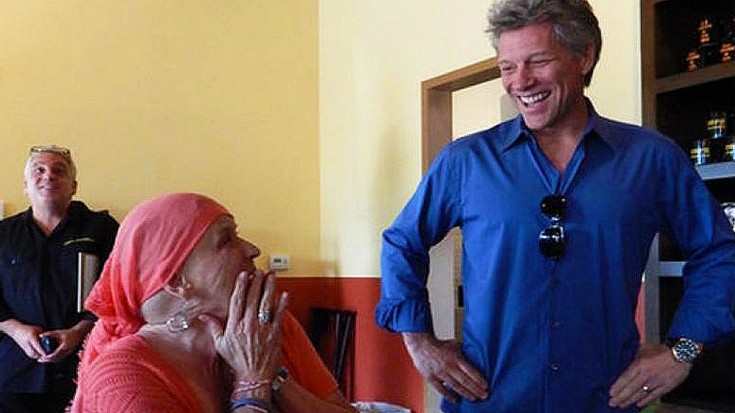 Finally – after a month of news about a world seemingly in a constant stage of tragedy, some good news out of the rock world and it’s sure to restore your faith in humanity! This weekend saw lifelong Bon Jovi fan Carol Cesario, currently battling stage 4 lung cancer, get the chance to visit Jon Bon Jovi’s Soul Kitchen with her daughters and was beyond elated just to have a meal in the famed New Jersey restaurant.

What she didn’t expect was that just moments into her meal, she’d be graced with a very special lunch guest who wanted to make sure not only was Carol having a great time, but that the experience would be something she’d never forget. Sitting with her back to the door, Carol was absolutely floored when Jon Bon Jovi strolled in – so floored, in fact, that all she could do was cover her face and scream “Oh my God!” as the singer sat down next to her.

The surprise meeting came after a social media campaign created by Carol’s daughter Rosie went viral, prompting Bon Jovi’s manager to contact her within an hour of posting a makeshift sign pleading for a visit. “I lied to her,” Skripkunis said. “I told her I wrote to his restaurant, that they said they couldn’t pass fan mail on, but that they had invited us for a free meal. It was a free meal, but it was a free meal with Bon Jovi there.”

To make the occasion even more special, Jon gave Carol a preview of the band’s upcoming album This House Is Not For Sale along with a signed book, guitar, and a kiss for good luck. Guys, you’ve just got to see her reaction in the video below – we’re not the crying types, but we’d be lying if it said it didn’t get us a little choked up!