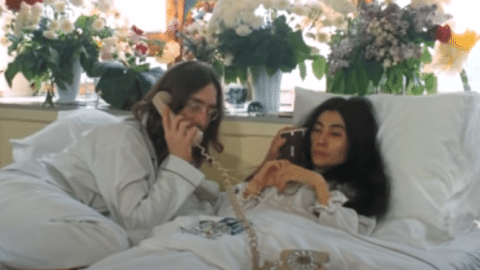 The short documentary film about John Lennon and Yoko Ono titled 24 Hours: The World of John and Yoko is already available to stream on the Coda Collection via Amazon Prime Video US.

This is the first time the 30-minute mini-docu has become available to watch in full since its initial release on BBC on December 15, 1969. Directed by Paul Morrison, it follows the couple over five days, and shows their creative process. It also includes their activism, such as their campaign in promoting peace. The filming took place at Abbey Road Studios in London, Lennon’s Tittenhurst Park estate, and the HQ of Apple Records.

It shows Lennon and Ono in their iconic “Bed-ins for Peace”, and clips of them working in the studio, watching a giant air balloon, and of Lennon calling out the press.

24 Hours: The World of John and Yoko also features a new editorial by journalist Alan Light where he describes it as “a portrait of two energized and inspired artist-activists, with a strong sense of purpose and a fearless attitude, even in the face of resistance and ridicule” and also as “a fascinating snapshot of a hugely transitional moment for John and Yoko.”