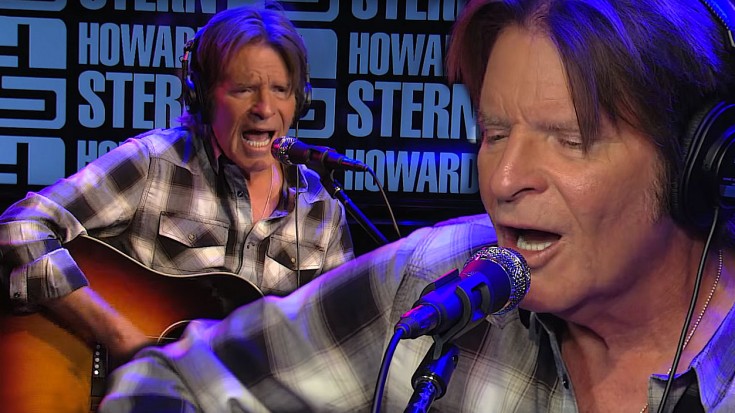 Known for being the shock jock to end all shock jocks, Howard Stern is known for something else: his fantastic taste in music. With a radio show that’s boasted musical guests from Slash to AC/DC, Howard’s an even bigger rock fan than we ever knew, always excited when a legend walks into the studio, sits on the couch and launches into a classic or two. In 2015, The Howard Stern Show didn’t disappoint when special guest John Fogerty made an appearance on the show in support of his new book Fortunate Son and while there, delivered an intimate performance of “Have You Ever Seen The Rain” that left the studio silent.

Written in 1970, “Have You Ever Seen The Rain” is about the rising tensions in Creedence Clearwater Revival tied to Fogerty’s controlling nature when it came to writing and recording – the same ones that would drive John’s brother Tom Fogerty from the band less than a year later, which in this footage John alludes to after jokingly being called a show-off by Howard Stern by replying, “Yes I am, actually!”.

Fun Fact: Except for Elvis Presley and The Beatles, Creedence had more success with two sided hit singles than any band up to that point in time.

It’s impossible to miss the smile on Stern’s face during “Have You Ever Seen The Rain” – we don’t know if it’s his favorite song, but it’s pretty clear that like for us, Fogerty’s performance is tied to nothing but good memories for Howard!