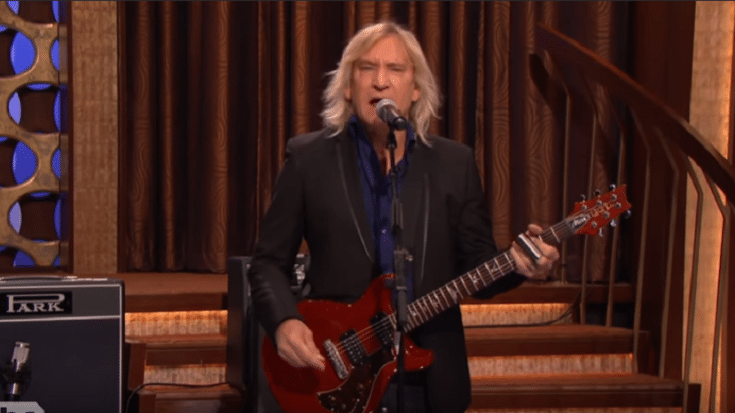 From One Guitar Deity to Another

In a new interview with Billboard, Joe Walsh talked about his contributions to brother-in-law Ringo Starr’s latest album What’s My Name. He co-wrote “Gotta Get Up to Get Down” and also played on a cover version of John Lennon’s “Grow Old With You” which includes Paul McCartney on bass. He revealed that he channeled late Beatle George Harrison when playing.

Walsh said, “Oh boy, that was great. It sounds just like the Beatles. At first I didn’t know what to do, but I think I really nailed it, and I’m so proud of it. I just thought, ‘What would George (Harrison) do?’ and went with that. It’s a real honor and privilege to be on song like that.”

Walsh met Harrison a couple of times and they even played together in 1992 at London’s Royal Albert Hall. He also shared that he “was screaming right along with all the rest of the girls” when he saw The Beatles perform at the Shea Stadium in New York.

And he has nothing but praises for George Harrison. Speaking about Harrison’s guitar playing, Walsh said in 2017: “When you sit down and try one of his leads, the technique is wacky. The parts he would come up with, they don’t make any sense, but they’re brilliant. His choice of notes makes your hand go to a different position than anybody would ever think of. You really realize how special he was.”