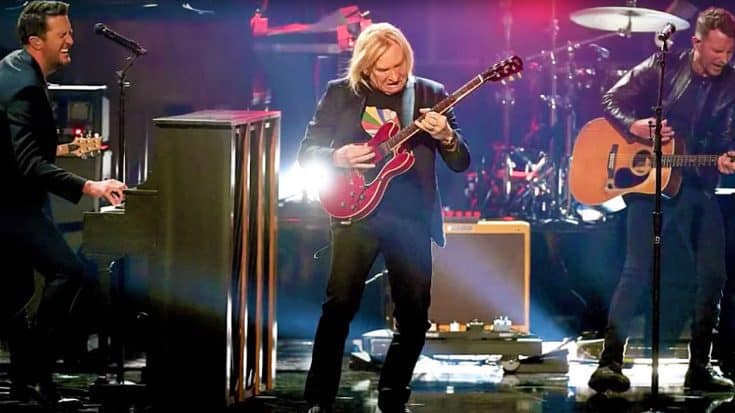 It was a boot stompin’ good time for all Sunday night as the Academy of Country Music Awards took center stage, celebrating the best and brightest of the country music world with one of the most highly anticipated events of the season. While country music was the proverbial man of the hour, rock music had its brief moment in the sun as country giants Luke Bryan and Dierks Bentley hit the stage for a bruising cover of Chuck Berry’s 1958 classic “Johnny B. Goode,” enlisting the help of rock legend Joe Walsh in tearing it up in honor of Berry, who died March 18th at the age of 90.

Fun Fact: “Johnny B. Goode” was a major hit among both black and white audiences, peaking at number 2 on Billboard magazine’s Hot R&B Sides chart and number 8 on its Hot 100 chart.

“Johnny B. Goode” makes it impossible to sit still even on a good day, but on a night like Sunday night and at an event like the ACMs, this rock and roll staple got everyone out of their seats and moving as Luke and Dierks traded rapid fire vocals, leaving Joe to serve up some of his signature guitar work for a performance that even Chuck Berry himself would have loved. Rock and country music may have split off into two separate factions long ago, but nothing makes me happier than seeing these two come together in the name of a man whose music broke unimaginable rules and barriers. Enjoy!