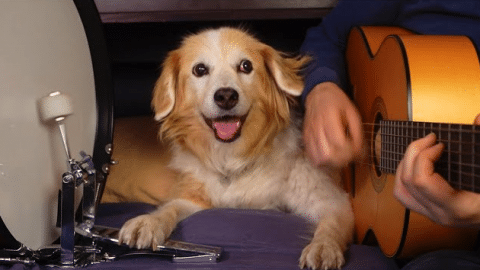 We’ve lost track of how many “Purple Haze” covers we’ve seen and heard but somehow, this one by YouTube user Acoustic Trench stands out because he’s accompanied by what he calls his “loyal furry sidekick” named Maple.

Maple, as you can see, is no ordinary dog. He doesn’t just enjoy listening to classic rock music, he also likes playing them. He’s one reliable bandmate, for sure. Jimi Hendrix himself would be so proud.

“Purple Haze” was the Jimi Hendrix Experience’s second single released on March 17, 1967. It showcased Hendrix’s immense talent and genius since the track features his signature Hendrix chord. The guitar legend described it as a love song even though most listeners consider it as a reference to psychedelic experience. There have been various interpretations regarding its meaning. Hendrix often gave different answers when asked how “Purple Haze” developed.

He once said, “You know the song we had named ‘Purple Haze’? [It] had about a thousand, thousand words… I had it all written out. It was about going through, through this land. This mythical… because that’s what I like to do is write a lot of mythical scenes. You know, like the history of the wars on Neptune.”

It brilliantly captured the sound of the ’60s and interestingly, Hendrix wrote it in between sets in London.